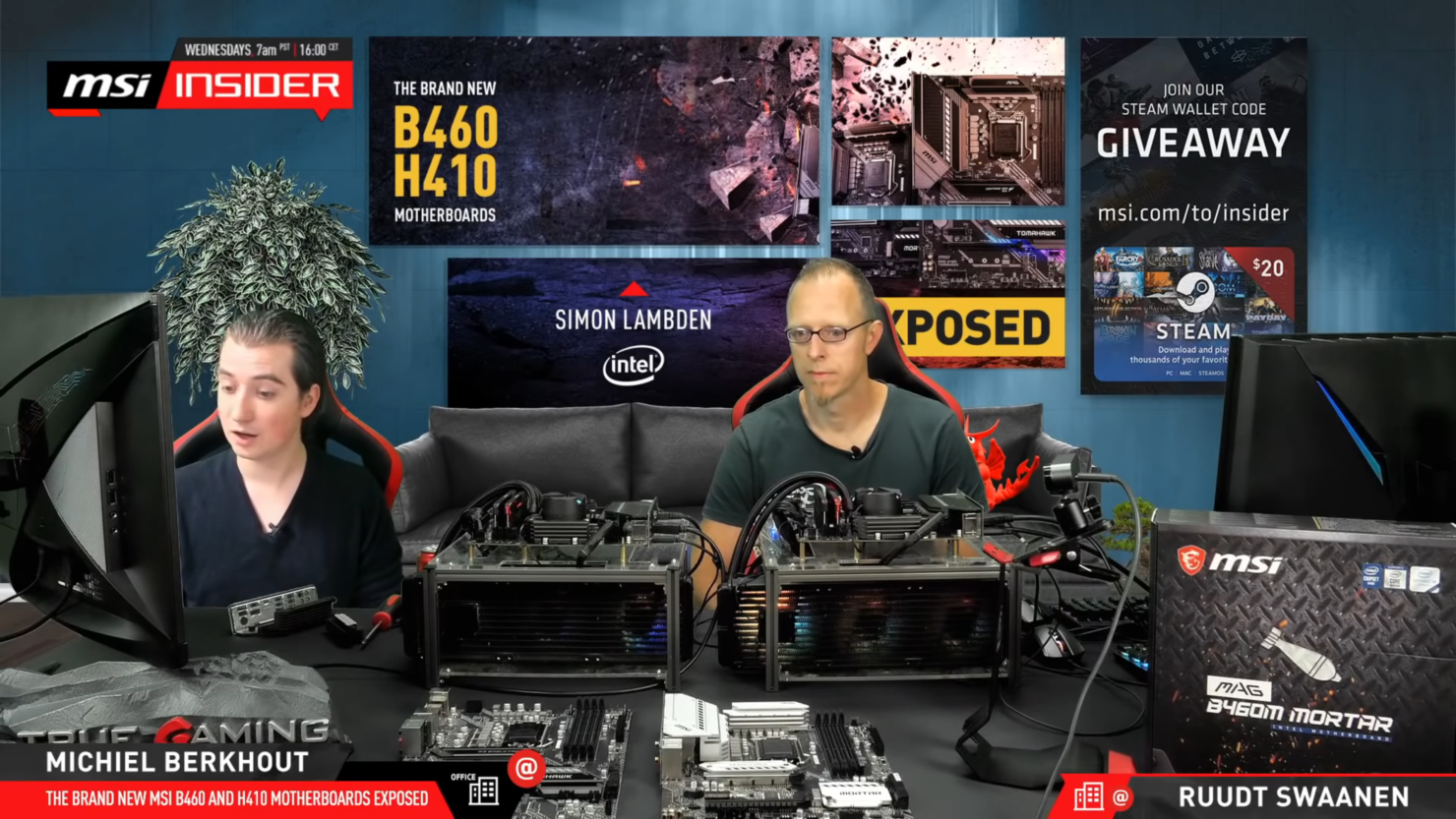 During a live stream held last week, MSI showed the capabilities of its B460 & H410 motherboards using power limit overclocking on Intel's 10th Gen Comet Lake CPUs. MSI compared the overall performance of Core i9-10900 using a stock Intel provided configuration and one with their own enhanced (PL Overclock) settings.

Using Intel's XTU (Extreme Tuning Utility), the two Core i9-10900K's were tuned to operate at vastly different settings. One of the chips was set to Intel's default spec for the Core i9-10900 with its PL1 profile set to 65W and PL2 profile set to 225W and with a TAU of 28 seconds. The Core i9-10900 on the other testbed was set to 255W PL1 and 255W PL2 which is the max power limit overclock which MSI offers on its motherboards while ASUS offers up to 210W PL overclock on a single STRIX model.

MSI also stated that the maximum power draw on its B460 lineup is set to 210A whereas lower-end H410 series boards will feature a 180A current draw which is set by default to protect the power-circuits on the said motherboards.

Both CPUs were also set to the default clocks of the Core i9-10900 which is up to 5.2 GHz on a single core with thermal velocity boost and up to 4.6 GHz with all 10 cores operational. Having a higher power limit will definitely result in these CPUs hitting the said clock frequencies more commonly compared to their reference power limit profiles which could limit long/short term boosting capabilities.

Starting with the performance, first of all, it's important to mention the cooling here as it plays a major role in these types of tests. Both setups used a 360mm AIO radiator on a $100 US board & Intel's 10 Core CPU that costs over $400 US. This was done to see the maximum potential of B460 motherboards when they aren't thermally throttled.

Compared to the non-PL overclock testbed which was running at an all-core frequency of just 3.2 GHz for all 10 cores which are just slightly above the base frequency of 2.8 GHz, the CPU with PL boost was operating at 4.6 GHz during the entire workload. At the same time, the CPU reported increased temperatures due to higher power input. The temperatures at average peaked around 60C compared to 36C on the standard Core i9-10900 while the package power was around 170W compared to 65W for the reference configured chip.

The stock chip scored 4308 points in Cinebench R20 whereas the PL boosted chip scored 5820 points which is a 35% increase in performance. Both CPUs do run with similar thermals & power when on idle mode but even at idle, the PL boosted chip comes close to its aforementioned TVB profile of 5.2 GHz. Despite the better cooling, the reference CPU is constrained by its power limit and hence drops down to much lower clock speeds quickly when compared to the 255W profile which sticks to higher clock speeds for an unlimited duration since there are no power or time constraints on it.

In AVX heavy workloads such as Prime95, even the 255W CPU dropped down short of its all-core boost frequency since it was hitting the max current draw limit of 210A. Still, an all-core frequency of 4.4 GHz is very respectable compared to the standard chip which can only boost up to 2.8 GHz across all cores.

MSI also conducted the same tests with its Core Frozr L series air heatsink cooler. In Cinebench R20, the CPU maintained the same package power and frequencies as with the 360mm cooler but the temperatures were noticeably higher at around 75-85C. The CPU scored pretty much the same score which was within the margin of error.

In the end, MSI also tested the testbed with a stock Intel CPU cooler but considering the CPU is inadequate for 255W, the power limits had to be revised and configured down to 80W (PL1) and 125W (PL2) with a TAU of 28 seconds. Some interesting find was that the CPU peaked to around 4.2-4.3 GHz during its PL2 duration of 28 seconds, hitting an average package power of around 125W. As soon as the PL2 profile tripped over to PL1, the package power and CPU clocks dropped down to 80W and 3.5-3.6 GHz, respectively.

The temperatures fluctuated between 70C (PL1) and 80C (PL2) using the stock Intel cooler. That's still an 8% performance boost over the standard Intel spec'd chip which was running under liquid cooling. For users buying non-K Core i7 & Core i9 CPUs to run on a B460 motherboard, a decent liquid cooler makes a lot of sense. You can read more about the power limit overclock technologies introduced by several manufacturers on Intel's H470, B460 and H410 motherboards in our detailed post over here.