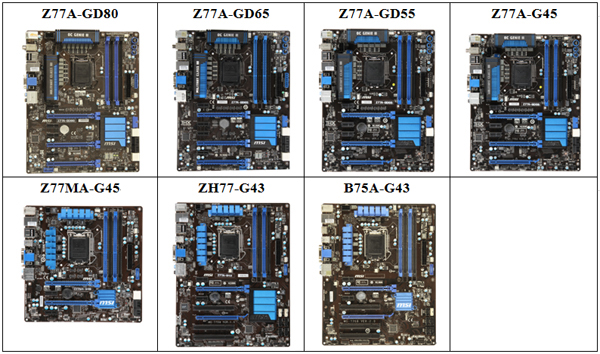 Continuing MSI's commitment to the product's stability and durability, MSI's 7 series motherboards also imported Military Class III components. In addition to importing Highly-conductive Polymerized Capacitors (Hi-c CAP), Super Ferrite Choke (SFC) and Solid Capacitors (Solid CAP), there is also the next generation DrMOS - DrMOS II. It is embedded with fully automatic dual-thermal protection; when the operating temperature reaches to about 115℃, an indicator on the motherboard will light up, warning the enthusiast to check MOSFET's cooling status; if the operating temperature reaches to about 130℃, the system will automatically power off, ensuring the motherboard will not be damaged from high temperature! These components all passed rigorous testing conducted by third party laboratories: extreme temperature, humidity, pressure, vibration and dropping; and have received the MIL-STD-810G Military Class certification, making MSI's Military Class III components the synonym for the highest quality and stability.

MSI's exclusive OC Genie II technology only requires one second to generate amazing performance increase, and also release the CPU, iGPU and memory performance at the same time. Once enthusiasts have activated the OC Genie function on MSI's motherboard, it allows the iGPU's performance to increase by over 36%! In addition, OC Genie II decreases the PC booting time along with Intel Smart Response Technology, maximizing under the most stable situation and considerably saving enthusiast's time for system adjustment. The brand new My OC Genie function allows users set the overclocking settings manually for better performance.

This is the world's first system tool that integrated UEFI BIOS and Windows application programs; it allows you to adjust system settings under different environments through the mouse or even the LCD touch panel. Click BIOS II is also the world's first BIOS that allows overclocking settings to be saved onto USB flash drives, and even allows overclocking enthusiasts to upload it to the internet and share it for other enthusiasts to use. It supports as many as 15 languages and is optimized for dozens of commercially available gaming mouse models. Such convenient and thoughtful functions are new technologies developed for MSI motherboards based on enthusiast needs

MSI Intel 7 series mainboards support the latest PCI Express Gen 3 standard to deliver a staggering 32GB/s of bandwidth, double that of the previous generation, as well as the next generation 22nm processors. It allows users enjoy the latest standard for better use experience.

The MSI 7-series motherboards' native USB 3.0 has better performance than 3rd party controllers, and offers greatly improved data transfer speeds! The MSI Z77A-GD80 even supports the newest Thunderbolt transfer interface. The bilateral bandwidth reaches as high as 10Gbps, and with power able to be supplied, only one cable is required to connect peripherals such as high resolution monitors and large capacity external storage devices. It can conveniently and quickly backup large multimedia data, completely satisfying the needs of professional workers and computing enthusiasts.

MSI 7-series motherboards are equipped with the newest Multi-BIOS II technology; they have two complete built-in BIOS chips, allowing enthusiasts to use the switch on the motherboard to switch and boot up with the second BIOS when the first BIOS is lost or corrupted. Customized BIOS profiles can even be saved on individual chips, providing a safe and convenient design. Additionally, included on all 7-series boards is the Control Center II software, which monitor the operating speed, voltage and status of various components such as CPU/RAM/PWM and the system fan from one single intuitive interface. Control Center II also allows adjustment of the CPU voltage and frequency, completely opening up the overclocking potential! Monitoring tools such as V-Check Points – which can directly measure the voltage on the board – and Debug LED allows you to quickly grasp the motherboard's overall health and information, and the special HeatPipe thermal design can effectively eliminate high temperatures caused by overclocking.

The MSI Z77/H77/B75 series motherboards have built-in THX TruStudio ProTM surround sound technology that enables the best audio quality reproduction, allowing you to have the most realistic dynamic sound field effects when watching Blu-ray movies, playing other multimedia or playing 3D games. Also, the MSI Z77-series motherboards support Lucid's Virtu MVP technology that can dynamically switch between the built-in graphics onboard the CPU and an add-in discrete graphics card, distributing system resources based on the user's performance needs.