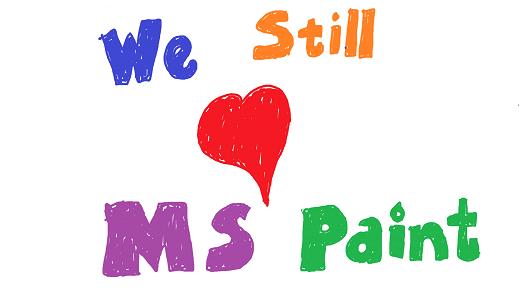 Windows OS doesn't have any space for Paint; you'll be able to download it for free though

Microsoft has confirmed it's not killing the 32-year old Paint app after all. MS Paint will no longer be a part of Windows 10 and will spend its last years in Windows Store for free. Ugh Microsoft, make up your mind? Not that we are complaining.

The Redmond tech giant gave the cold status of "deprecated" to MS Paint, which received some major wistful reporting yesterday. The company says the trusty old MS Paint is here to live and that its intentions were misunderstood. However, this old piece of software would definitely not be a part of Windows 10 and will find its place in the haunting corners of Windows Store.

"Today, we’ve seen an incredible outpouring of support and nostalgia around MS Paint," Megan Saunders, General Manager, 3D for Everyone Initiative, Windows Experiences wrote in a blog post. "If there’s anything we learned, it’s that after 32 years, MS Paint has a lot of fans. It’s been amazing to see so much love for our trusty old app."

Saunders added that she wanted to "set the record straight, clear up some confusion and share some good news:"

MS Paint is here to stay, it will just have a new home soon, in the Windows Store where it will be available for free.

Okay, if this isn't death enough...

This is the first time that Paint is leaving Microsoft's operating system since being released with Windows 1.0 back in 1985. But many will rejoice having free access to MS Paint, which has been a part of nearly everyone's tech-journey.

It isn't clear if Microsoft decided to host this piece of art in Windows Store in response to yesterday's nostalgic support, or if it was indeed the original plan. Over 100 million Windows users use the app every month. However, Microsoft is ready to move on to newer, better things.

"Paint 3D - the new app for creativity, also available for free with the Windows 10 Creators Update, will continue to get new feature updates," Saunders adds. "In addition to the new 3D capabilities, many of the MS Paint features people know and love like photo editing, line and curve tools, and 2D creation are in Paint 3D." If you say so...