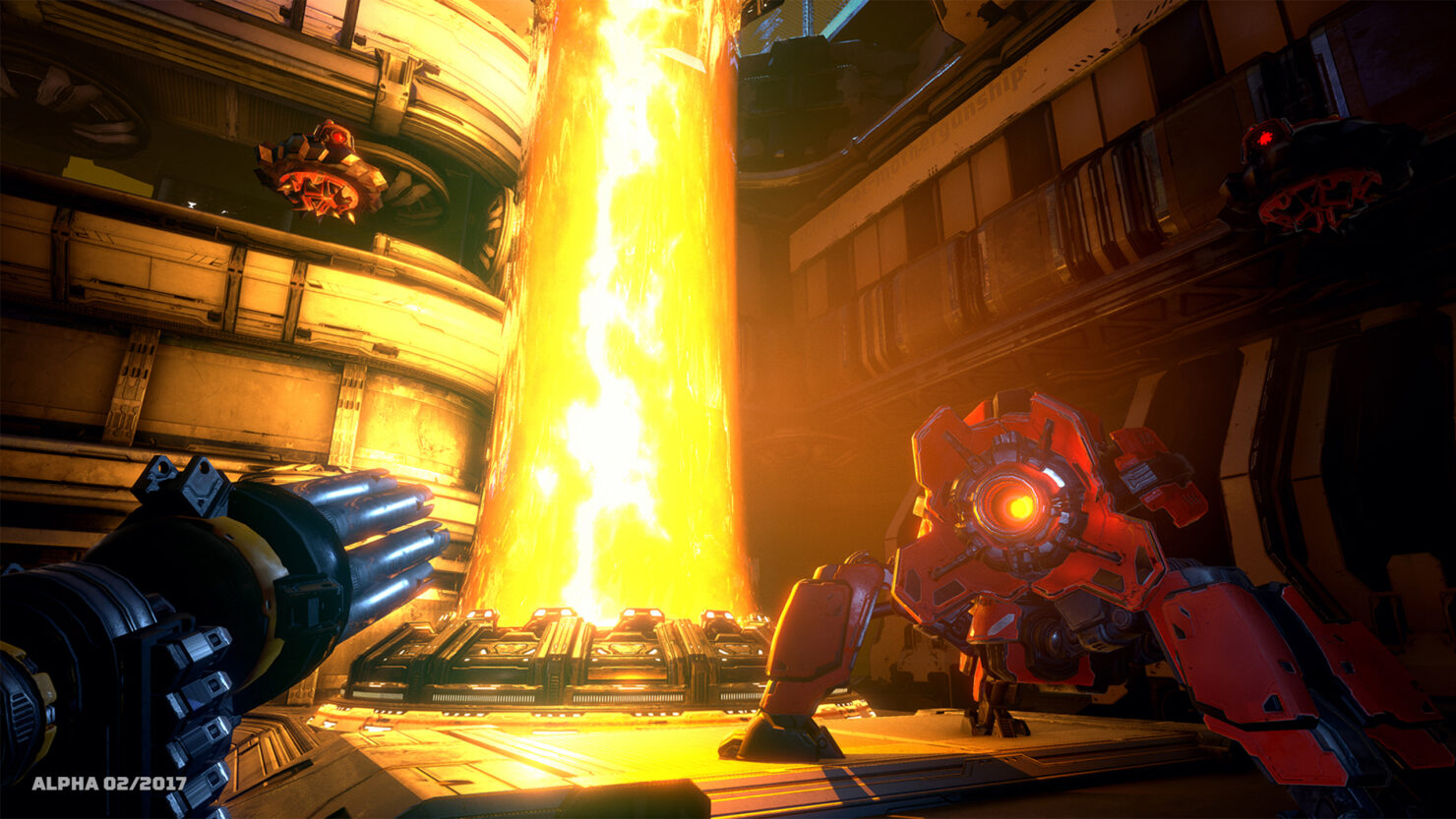 Following in the footsteps of 2014’s release of Tower of Guns,  the folks at Terrible Posture Games and Grip Digital have been taking what they learned about procedural generation back to the drawing board. The culmination of the past three years has let to a followup as intense as its namesake: Mothergunship. Given that it was on showcase at the PlayStation Experience, the PlayStation 4 Pro build was proudly on display, even with a few hitches in performance.

Although my time with Mothergunship on the PSX 2017 showfloor was brief, I received a nice taste of what a run through the randomly generated ship would feel like. Each little corridor was its own separate encounter and I could see the framework that easily allows the developers to come up with algorithms to create all sorts of room and enemy combinations to test the player’s mettle. Drawing inspiration from the arena shooters of the late 1990’s like Quake, Mothergunship is all about constantly moving and shooting instead of scouring the edges of the rooms for hidden secrets.

Just as random as the corridors and enemies within, the weaponry of Mothergunship won’t often see the same build twice. Pieced together through parts found in shops tucked away between corridors, players can purchase extra components with the currencies earned through blasting away whatever comes after the player (hugbots too? Who knows!). 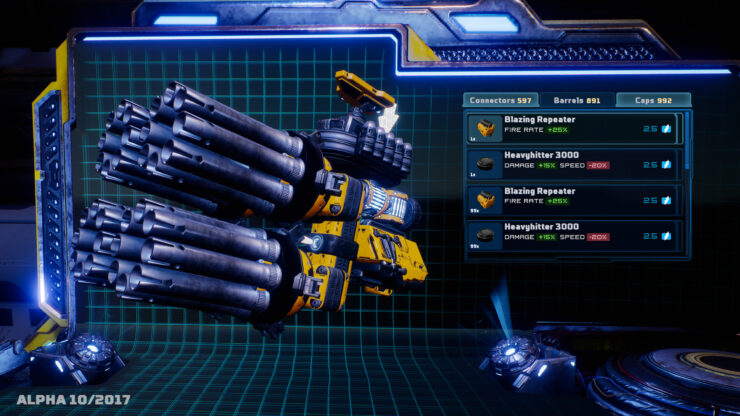 If you can make it fit, it’ll shoot; that’s the adage I followed in trying to come up with a gun that would keep me alive as I trekked the halls of Mothergunship. The usage of little extender blocks and spacers give a little bit of breathing room when trying to attach a massive sawblade or rapid-fire module to your basic hand cannon. By the end of my run, I was rocking a fully-automatic assault rifle that fired out circular saw blades in one hand, and a massive cannon that launched crosses of light in the other.

Perhaps the only drawback to having the freedom to craft the gun you want is having the power to keep the trigger down. I failed to heed the person giving me the demo’s advice and attached every single part I could find onto my weapon. After a few seconds of shooting, my battery was drained and I was left jumping and evading bullets while waiting for it to recharge one more. This was before I had acquired my second gun, so there was a lot of awkward parkour just to stay alive long enough to shoot down the machinations that wanted me dead. I would gladly turn down additional jumps in lieu of extra battery power, so I’m hoping the final build sees more accessibility and creativity with the upgrades.

Running and gunning through Mothergunship, much like the team’s previous work with Tower of Guns, feels perfectly suited for a roguelike infusion to the FPS genre. Evasive double, triple, and even pentuple jumps gave my character the mobility to jump around walls of incoming fire or reach a hidden platform. The sense of speed as I tried to speed run through corridors and strafe around enemy bullets and defenses felt great, even with the basic starting gun without any of the crazy attachments. The more my weapon bolted on new attachments, the faster the process went (when not having to contend with battery power from going overboard).

The final boss of my run through Mothergunship set me up against a massive mining laser, with drills and bullets to match.  This hulking behemoth was quite clearly the final encounter of Mothergunship’s hands-on, so I knew that was little reason to hold anything back. The stage of battle was clearly meant to be a drawn-out battle, with the drill slowly advancing forward and forcing the player to retreat back through the use of jump pads and platforms. Problem is, those guns I built were perhaps too powerful (especially the attachment that fired upside-down crosses). In the first minute or so of the boss fight, I had already done far more damage than I was supposed to and killed the boss during one of its first advances forward. I was left in awkward silence as I ran and jumped to the far end of the arena.to the level’s exit and the end of my short time with Mothergunship. Performance-wise, Mothergunship definitely handles the action better than Tower of Guns did on the PlayStation 4 Pro. Frame dips were a constant occurrence, as can be expected of a game that throws dozens of bullets for the player to jump around and evade at once. There’s still quite some time before the release of Mothergunship and I have high hopes for the Grip Digital team to help smooth out the experience (although some slowdown might not necessarily be a bad thing if it gives me more time to react..).

Mothergunship is shaping up to be an interesting take on the growing roguelike subgenres. Bolting the gun customization mechanics onto an arena FPS gives Mothergunship a unique feel that should whet the appetites of those that thought Tower of Guns could use some more badass weaponry. Even after the release of Strafe that just wasn’t quite random or bombastic enough, I’ve seen enough of Mothergunship to know that the framework and promise of bigger and better guns isn’t too far away.

The game is due next year for PC, PlayStation 4 and Xbox One.