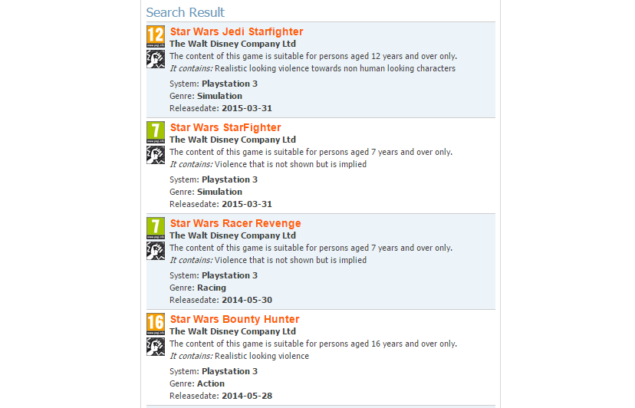 Could this mean that those four games are making a comeback under the PS2 Classic modality? Or is it an elaborate April Fools hoax instead? The former is more likely rather than the latter, thankfully. To submit such games to be rated by the PEGI takes time, resources and money that I don't think many companies are going to use just for an elaborate and quite secretive April Fools hoax.

What's more is that two of the aforementioned games were registered last year around May, but we still haven't seen those titles out yet. This is a very interesting situation to see considering that Disney has previously cancelled a few Star Wars video game projects, such as 1313 and Star Wars First Assault.

This may indicate a resurgence in the franchise that might coincide with the release of the new movies. Perhaps Disney has now finally realized the significance of the franchise and the opportunities that are right in front of them. The Star Wars franchise is absolutely huge, and though the fans are no less picky than any other franchise fans, it makes financial sense to capitalize on the successes of the classic Star Wars games that are currently not readily available.

I know I've gone back to play the Jedi Academy games, and have thoroughly enjoyed the the X-Wing series that has been brought back to us via GOG. I've even contemplated buying a PS2 just to finally play Bounty Hunter, as that's one game I missed when it was released. In reality, even Star Wars: Rebellion, a 4X strategy game with a Star Wars story attached to it, can hold my attention better and longer than even Destiny.

Some of the classic Star Wars games really did capture the essence of the universe and helped to continue the mythos where the more modern examples seem to fall down. If they take the stories already developed by some of the great authors who've contributed already, and by JJ Abrams, perhaps they can finally make Star Wars video games a franchise worth playing again.