Mobile Devices would Feature Graphics Power Equivalent to an Xbox 360 by 2014, Says NVIDIA 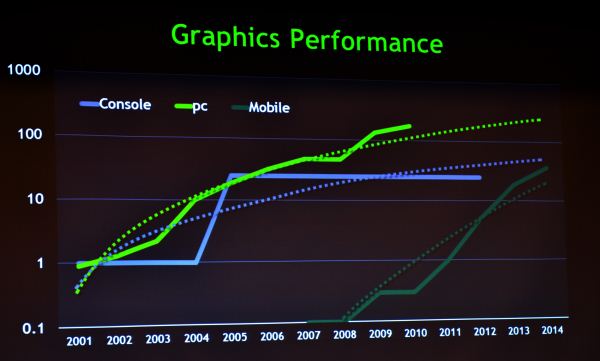 NVIDIA claims that its next generation mobile devices would deliver graphics performance of an Xbox 360 by 2014.

According to the slide revealed by Anandtech, Consoles would see no improvement in their graphics performance until the Next-Gen Consoles arrive which are rumored to be released by 2015. PC and Mobile devices on the other hand would undergo steady growth and looking at the current trend mobile devices could even outperform PC in the near future.

This would allow for a bigger gaming market on those devices especially tablets such as iPad, etc. It would require  console giants such as Microsoft and Sony to substantially improve performance of their next generation products if they want to keep up with PC and Mobile devices.