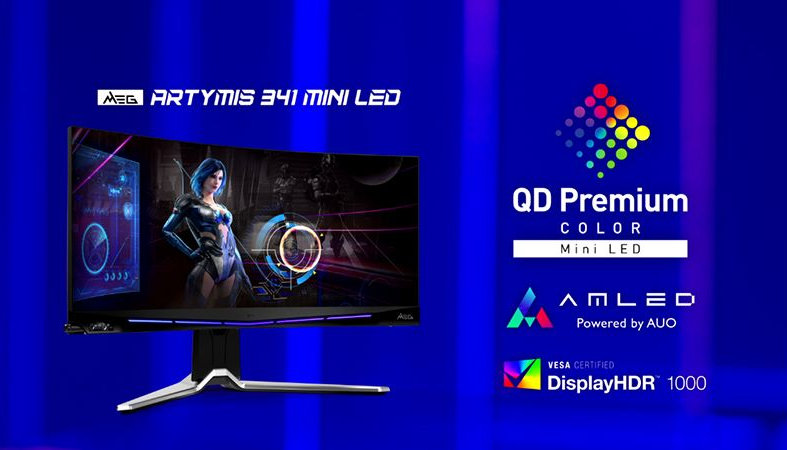 With Microsoft releasing the newest Windows 11 operating system last month, and the release of the next-gen Intel Alder Lake CPUs, MSI began to forecast that an increasing amount of consumers are more prevalent when talking about a display's color and quality with the wake of at-home PC and laptops providing high-end performance using the latest technologies. MSI found that during their online volume research, consumers' needs when it comes to "response time and refresh rate" have increased since previous years. Consumers want increased color performance since the amount of use has increased in the last few years.

During a review of the MAG274QRF-QD, Tom's Hardware stated that MSI's QD displays have “the largest color gamut we’ve measured to date.” The MSI QD series is synonymous with their fans, as well as receiving numerous awards for their display technology. MSI revealed that the latest QD series will set "a new standard" for gaming displays.

QD's premium color efficiency not only equips Quantum Dot Film inside the display but also increases the optimization of applications to improve the calibration of color. This allows gamers to access the best color in any game or application they use. The initial QD premium color support monitors will be the MPG Artymis 273CQRX-QD, MPG Artymis 273CQR-QD, and the MEG 341 Mini LED.

MSI recently "announced the collaboration" with the famous display panel company. MSI revealed the first 34" display utilizing Mini LED tech manufactured by AUO AmLED solutions. The new monitor will also showcase an 800R center curved rate, as well as up to 1000nits to reach the HDR 1000 performance levels. Along with being listed with QD Premium Color, "the highest color standard of gaming monitor", MSI hopes to bring the greatest gaming experience for their users.

Besides current curved and Esports gaming monitor segment, MSI announced that will provide console gaming line-up to console lovers since the latest console device has supported high refresh rate and 4K resolution. More console gamers are looking for best monitor with their new console. MSI already made console mode with small scaling to users that can capture 4K signal to 2K monitor.

MSI's unique KVM 3.0 feature shows that the ability for console gamers to use controllers to acquire a monitor's OSD Settings menu and Marco keys settings will be a feature that console users have not had before. Gamers will be able to "easily switch signal input or setting up monitor without an additional remote controller or stop gaming then drop controller to use their hand to touch physical buttons on the back of the monitor."

For gamers looking for a powerful 4K monitor with 144hz display frequencies, MSI offers the Optix MPG321UR-QD as a premium option. Optix MPG321UR-QD will offer fast response times and will "support 144hz at 4K resolution" using the current HDMI 2.1 technology. The new display will also be "the first MSI monitor with KVM 3.0 unique features."