Missed Mortal Kombat? Get The Komplete Edition With All DLC

Were you one of those people who missed out on the release of Mortal Kombat reboot for the consoles last year? If you did then I suggest you wait for the new Komplete Edition which comes with all the DLC characters and skins of other characters in the game too. For the same price you buy regular Mortal Kombat you can instead grab the Komplete Edition which will give you Kenshi, Freddy Krueger, Rain and Skarlet ALONG with the 15 alternate Klassic costumes for MANY of the in-game characters like Mileena, Kitana, Sektor, Cyrax, Sub-Zero, Scorpion and many more. 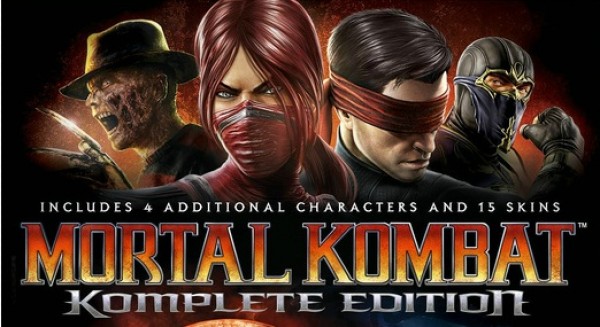 If you missed out on the Mortal Kombat reboot for the consoles last year and have been holding out for something worth while then this is a golden opportunity for you, the Komplete Edition give you every available pre-order skins, skins available for free and all the DLC characters that were released after the game. The Komplete edition is headed for the XBOX 360 and the PlayStation 3 on March 3rd 2012 and is definitely making the game a better purchase option than before, if you have Mortal Kombat and haven't used the online pass I highly recommend you sell it right now and pre-oreder the Komplete Edition today for the best experience of the game.

Below is a press release from Warner Bros. (Courtesy of the Source)

Developed by NetherRealm Studios and led by Mortal Kombat co-creator and creative director Ed Boon, the game will be available from March 2nd on PlayStation®3 computer entertainment system and Xbox 360® video game and entertainment system from Microsoft.
The 2011 release of Mortal Kombat was a triumphant return to the game’s original mature presentation offering over-the-top fatalities and wince-inducing X-ray moves. Going back to a 2D fighting plane, this latest iteration in the franchise introduced a number of new gameplay features including Tag Team, Challenge Tower, and a deep story mode. Players can choose from an extensive line-up of the game’s iconic warriors and challenge their friends in traditional 1 vs. 1 matches, or take on several players in the innovative online King of the Hill mode.
For more information about Mortal Kombat Komplete Edition, please visit www.themortalkombat.com, on Facebook at www.facebook.com/mortalkombat or on Twitter @MK_Mortalkombat