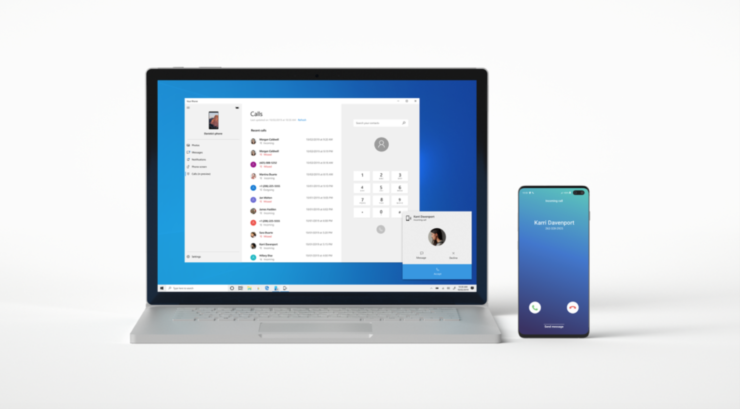 Microsoft's Your Phone app was unveiled alongside the Galaxy Note 10, at around the same time when Samsung and Microsoft announced their partnership publicly. Initially, the application was available only for the Galaxy Note 10. Support for other devices came much later, and the list included a fair number of both Samsung and non-Samsung devices. The Your Phone app has nothing to offer in the way of additional functionality and merely serves as a platform to manage all notifications from one place.

In the past, Microsoft Your Phone screen mirrored your Android screen to a Windows 10 device over Bluetooth LE (Low Energy, the same technology used by the new S Pen.) With the latest Windows 10 update, Microsoft has made it so that it works over WiFi. You can find the Link option to enable/disable it in Settings> Advanced Settings> Link to Windows. Moving over the means of communication from Bluetooth LE to WiFi allows more devices to utilize the service, as only a handful of modern-day smartphones support the former. However, Microsoft, in their infinite wisdom, made it so that the application will now run only on the following Samsung smartphones.

Windows 10's latest insider build (19013) makes screen mirroring over Bluetooth obsolete while keeping Link to Windows as the default option. Several OEMs such as Dell have their flavor of a phone screen mirroring software, so it shouldn't be too much trouble. The official Windows's changelog has the following to say:

With the new experience rolling out, we'll be removing the Bluetooth connectivity option, effective immediately. If you were previously enjoying Your Phone over Bluetooth and you have a phone model that doesn't yet support Link to Windows, the Phone screen node will disappear automatically within the Your Phone app. We recommend that you unpair your devices by going to the Bluetooth settings on both your PC and your Android phone so that you don't have a connection that is no longer in use.

You can still use other third-party screen mirroring services if support for your device has been axed. Galaxy S10 and Note 10 users are better off using the DeX app for Windows as it unlocks the full potential of your smartphone and lets you use it as full-fledged productivity devices.