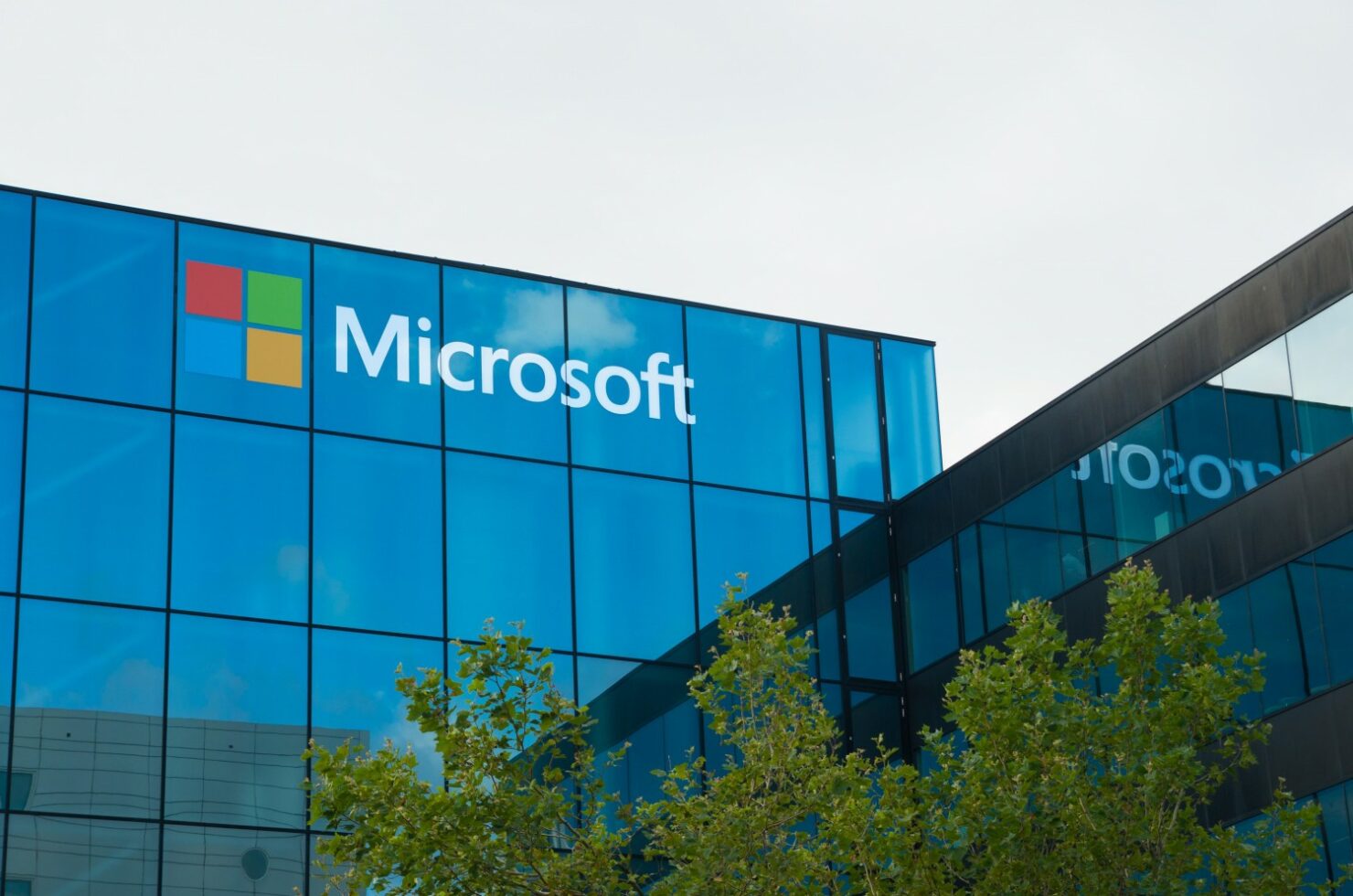 The coronavirus outbreak has made populations in the United States retreat indoors, as countries all around the world continue to deal with the fallout from the coronavirus. Thousands of deaths across the globe have nearly paralyzed government officials and workers - with the added shock of joblessness injecting the environment with pessimism. Stock markets reflected this sentiment at the close of last quarter, with the Dow Jones Industrial Average, Standard & Poor 500 Index and Nasdaq shedding up to a quarter of their losses well within the first two weeks of March.

Yet, despite this crash, stocks for companies facilitating remote working or shopping have gone up. Both Amazon  (NASDAQ:AMZN) and Zoom (NASDAQ:ZM) have witnessed sharp increases in their value, as they finetune operations to keep up with high demand.

Speaking of which, video conferencing platform Microsoft Teams has reported some staggering increases in demand for its platforms. Last month, Microsoft reported that Teams' usage had skyrocketed by 775% in February in Italy, and now. the company is out with some fresh numbers.

As Zoom battles with privacy concerns,  Jared Spataro from Microsoft is out with usage statistics for Microsoft Teams. According to him, Teams has set a new daily meeting minutes record of 2.7 billion minutes of usage in one day, which represents a 200% increase over the 800 million minutes that held the last record on March 16th.

In addition to sharing daily minutes, Spataro also reports another huge increase. According to the executive in charge of Microsoft 365, Teams witnessed a 1,000% rise in total weekly video calls made last month.

Talking about usage, Microsoft also reports that since February start, Teams mobile users grew by 300% to the end of last month. 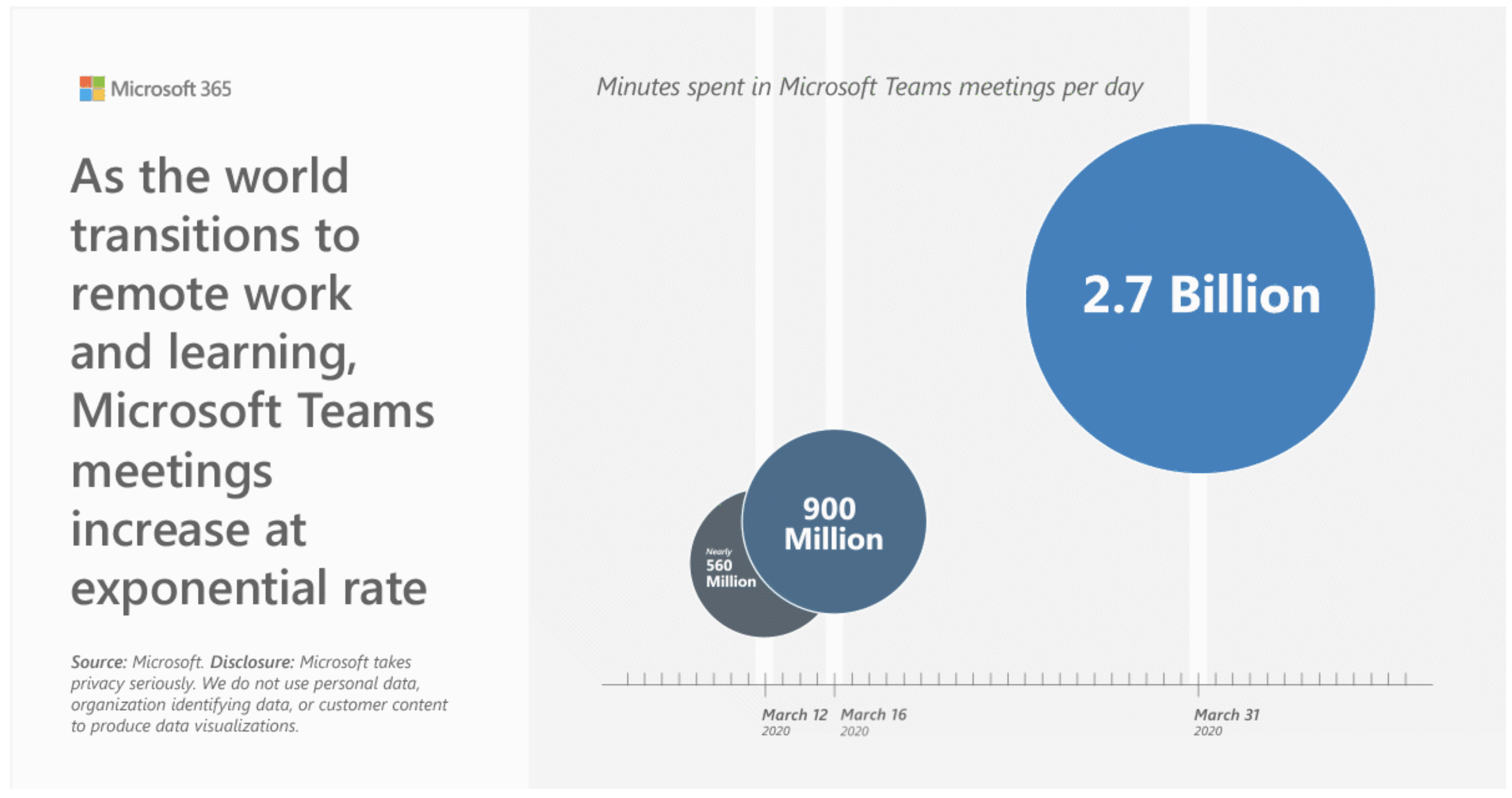 The software giant also reports that throughout the globe, with European countries taking the lead. The Netherlands led the globe percentage-wise in video calls made on the Teams in March and island nation Singapore reported the least percentage of video calls made. Microsoft believes that a lack of access to platforms capable of video calls is behind smaller percentages reported in Asia, with disruption ushered in by the coronavirus behind the usage surge in European countries. Usage statistics for the United Staes sit at the lower end of the global range, with 62% of total Teams calls in the country voice-only.

Today's figures are different from ones shared by Microsoft in the middle of last month. Back then, the company reported that Teams' daily average users had increased by 12 million in just one week by standing at 44 million on March 19th. The figure dominated statistics reported by Slack, which had reported 12 million users in November. 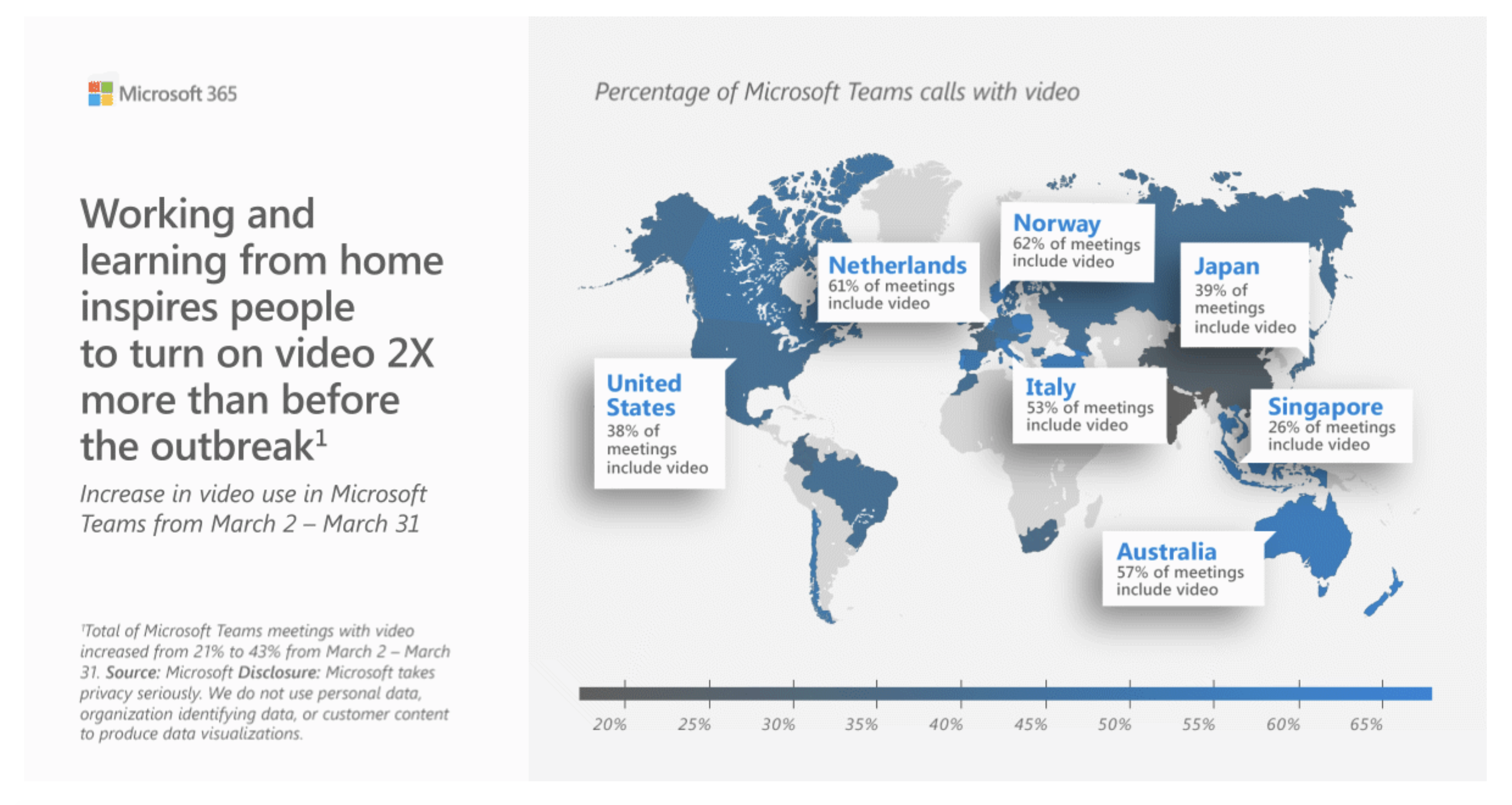 According to Microsoft, video calls continue to account for large proportions of Teams' usage globally.

With the first quarter of a tumultuous year has come to an end, companies across the board are gearing up to report their earnings. For those unlike Microsoft that depend heavily on manufacturing, the year might require stretching out balance sheets and cash reserves as populations wary from the death toll regain a sense of normalcy.

The software maker's shares have appreciated in March despite the computer and technology center and the S&P 500 reporting losses. Analysts expect Microsoft to post $5.58 in earnings-per-share in its third quarter of the fiscal year 2020 that ended in March.