With all of the focus invested on Windows 10, Microsoft must have forgotten about its Surface Hub, which has forced the company to delay its enormously large screen product till next year. However, for the affluent crowd who want to get their hands on Surface Hub; you will not be required to wait much longer because the company will commence its shipping operations from January 1, 2016. 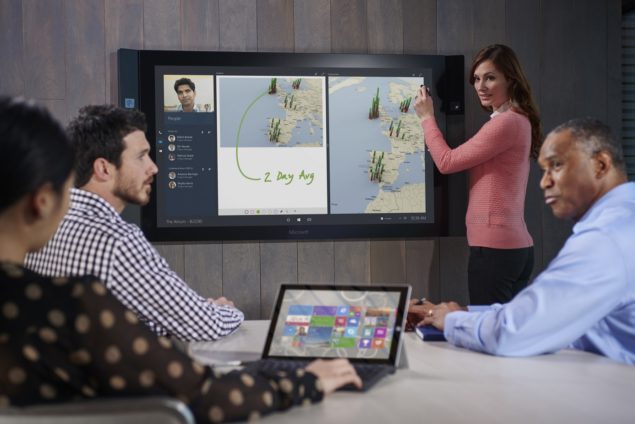 Surface Hub Can Be Purchased In The 55 Inch And 84 Inch Models; Will Cost You An Arm And A Leg

According to the latest info from ZDNet, Microsoft will be shipping its Surface Hub from January 1, 2016 and while the specifications of the large screen product are impressive, you’d best get ready to shave off a lot of your savings if you want to get your hands on one of these. The 55 inch model is going to feature Intel’s Core i5 processor, a resolution of 1080p, 128 GB of SSD storage and 8 GB of RAM.

The 84 inch model is a much more souped up version of the 55 inch Surface Hub, so you can rest assured that it is going to cost you a lot more than the smaller screen sized model. On the plus side, you will have an Intel Core i7 processor running inside it and what is even more exciting is that this particular Surface Hub model resonates a resolution of 3840 by 2160 pixels, and is armed with NVIDIA’s Quadro K2200 GPU. Both models of Surface Hub will come with the following:

The pricing details of both models have been stated below:

For all those itching to get their hands on a monumentally large screen to play around with, you’d best make sure to have a thick wallet as well.