Microsoft Surface Duo is Going to Launch on 10th September with a $1,399 Price Tag and Specs from Last Year

After months of teasing and only a day after the official renders leaked, Microsoft Surface Duo has received an official release date along with the price as well as the specs that will accompany this foldable smartphone. To begin with, the phone is launching on 10th September, later this year, and will accompany a $1,399 price tag.

The Surface Duo is currently available for pre-ordering in the US, and you can buy it from AT&T, Best Buy, and Microsoft online store. What will $1,399 get you? Let's have a look.

Microsoft Surface Duo Arriving Next Month with a Snapdragon 855, 6/256GB Memory, and LTE

The Microsoft Surface Duo is comprised of two individual 5.6-inch OLED panels that have an odd resolution of 1800 x 1350 and the aspect ratio is at 4:3, both displays connect together and give you an 8.1-inch overall screen real estate that has a resolution of 2700 x 1800 and an aspect ratio of 3:2. Unlike the foldable smartphones we have seen from Samsung, the Surface Duo actually uses Gorilla Glass, and the displays are designed in a way you would expect multiple monitors to work on a Windows PC.

The Surface Duo ships with an 11-megapixel f/2.0 camera; you have modes like low light, HDR multi-frame capture, and super zoom. On the video side of things, you can record at 4K as well as 1080p at both 30 and 60 frames per second. You are also getting electronic image stabilization. There is only a single camera, however, which will be used for video calls as well as the main camera. 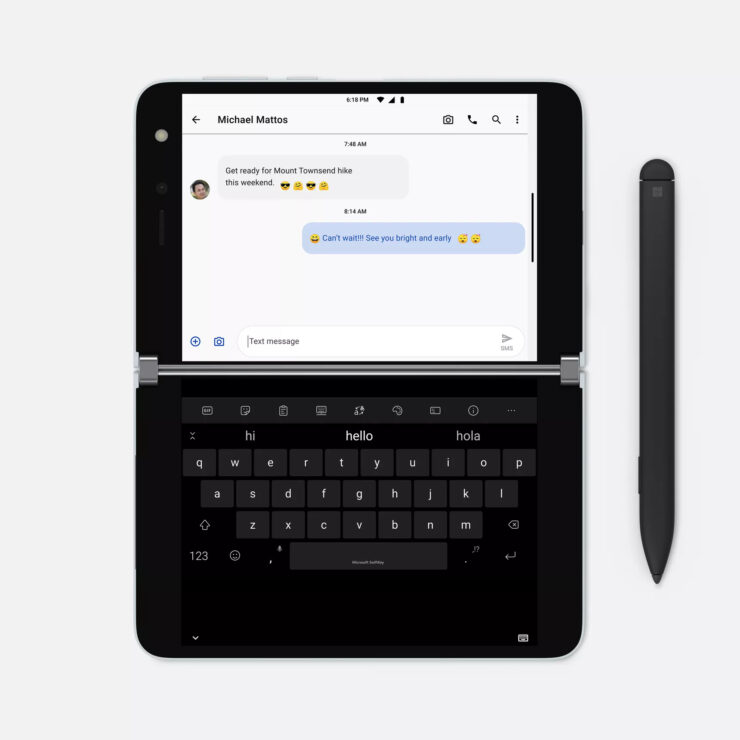 As far as the specs are concerned, you are getting a Qualcomm Snapdragon 855, coupled with 6 gigs of RAM, and up to 256 gigs of storage. You are also getting LTE on T-Mobile, AT&T, and Verizon but the Snapdragon 855 means that there is no 5G support at all. Microsoft is actually shipping a bumper cover that will provide some protection to the Surface Duo.

As expected, the Surface Duo ships with two batteries that are split between both displays. The total ends up being 3,566 mAh. Which, honestly, is not as high as we would have preferred in a dual-screen Android smartphone. However, Microsoft is making bold claims and talking about how the Surface Duo is going to be able to deliver a day's battery life, which means that you can expect up to 15.5 hours of local video playback, up to 10 days of standby time, as well as up to 27 hours of talk time.