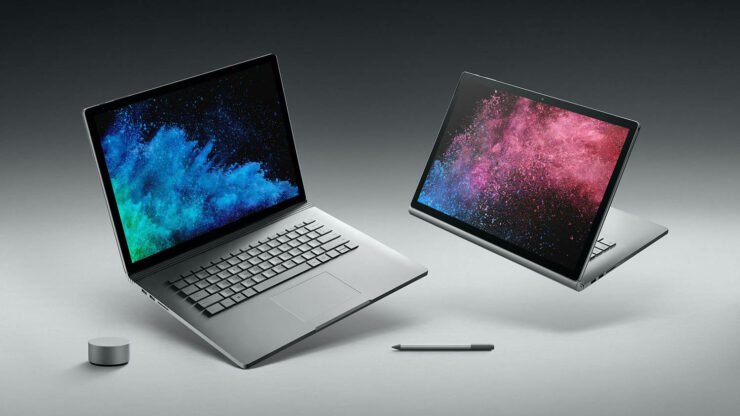 Just yesterday, we were discussing the screen sizes and other specs of the upcoming Microsoft Surface Book 3, and thanks to fresh details, we’ve come to know more about the GPU side of things. Since we talked about the Surface Book 3 arriving in two display sizes, it’s only logical that there will be different graphics processors present in both versions.

The Surface Book 3 is expected to arrive in the 13.5-inch and 15-inch display size variants. According to Roland Quandt, the smaller 13.5-inch model will be treated to an NVIDIA GeForce GTX 1650 with 4GB of GDDR5, while the bigger one will feature a GTX 1660 Ti with GDDR5 memory. Now there is something strange we noticed about this configuration and we believe you might have noticed it too.

The larger 15-inch Surface Book 3 will apparently have a slower GTX 1660 Ti on the memory side, and depending on what you’re doing, it can impact performance. Whether Microsoft is choosing this route to do a little cost-saving or opting to select GDDR5 memory due to thermal constraints, we don’t know as yet. What we do know is that there might be NVIDIA Quadro RTX options of the Surface Book 3 coming out later, as that’s what Quandt mentioned in his tweet.

Quadros on the 15 are coming, too, but no info on these yet.

This isn’t unusual because models like the Razer Blade Studio Edition ship with NVIDIA Quadro RTX GPUs to help creative professionals with editing extremely taxing and detailed footage. Previous spec leaks have shown the Surface Book 3 can be configured with up to 32GB RAM, and that should help users with applications that require a lot of memory. However, it’s the processor we’re mainly concerned about.

Sure with the 13.5-inch model, there are space constraints, so it’s obvious that Microsoft needs to stick with something like the Core i7-1065G7. However, if the same chip is found in the 15-inch version, it wouldn’t make a lot of sense to upgrade, since there are better, powerful, and cheaper options out there. Then again, Microsoft is probably banking on the fact that the Surface Book 3 will offer a ton of versatility for creators, casual gamers and those who consume a lot of content by making the display part of the notebook detachable, just like it did with the previous-gen models.

Then again, there’s not a whole lot of people that will want a product like this, so we’ll have to wait and see what other changes Microsoft incorporates when it officially announces the Surface Book 3 family.