In the recent turn of events, Ubisoft has taken quite a lot of flak from online gaming community after it was announced that the upcoming historical-adventure next-gen exclusive video game called Assassin’s Creed Unity will run at a native resolution of 900p and 30 frames per second on both PlayStation 4 and Xbox One consoles. However, it looks like that the French video game developer is not only facing issues with its public relations, but it is apparently also under depressing pressure by video game console manufacturers that want it to lock its next-gen games at 30fps on PC, matching the general specifications of games on latest video game consoles.

The growing influence of the PlayStation 4 and Xbox One consoles over the video game industry is affecting the overall distribution of standard yardstick. Ever since the launch of the latest consoles, the third party manufacturers and video game developers have diverted most of their attention to console gaming, and PC gaming, despite of being ahead of all in position, time, and manner, is being heavily sacrificed. It looks like this is not all, the growing console fixation, and their unfavorable feebleness is even forcing the manufacturers to bring down the level of PC gaming to match that of consoles.

Some recent days have been very controversial for Ubisoft, and now, after the whole 900/30fps debate surrounding Assassin’s Creed Unity and PlayStation 4/Xbox One parity, a new report has surfaced online suggesting that both Sony and Microsoft are putting pressure on the French video game developer to lock its next-gen game at 30fps on PC. Seems kind of ironic, but I can’t say if this could be completely uncalled for, after all, we all know what is going on with the latest consoles and all that resolution and frame rate thing.

The information comes directly from Ubisoft’s employees. According to the report, during a school presentation about game programming, a Ubisoft engineer/Game architect revealed that the company’s development teams behind next-gen games always aim for 60fps, but due to “limitations,” they settle for 30fps, and that the console makers are pressuring the developer into going for the same frame rate on PC with next-gen games.

Before you go on reading the transcript provided by Reddit user Timois, I would rather like to make it clear here that this is only a simple report by a random user, so despite the proof that he provided in a form of screenshot that has been shared below, this all shouldn’t be taken that seriously.

“So what the hell happened with watch dogs?” u/Egg_Slicer

During the presentation, the Online Programmer said that just before they release a game, they have to send a copy to console manufacturers, which then tell them what to keep and what to throw away (sooo yeah Watch Dogs maybe ?).

The Game Architect said that they aim for 60 fps but due to “limitations”, they have to settle for 30 fps in recent games. He then implied that console makers are pressuring them into doing the same thing on PC.

“Ask how bad the upper/middle management is.” u/Ed130_The_Vanguard

The HR rep said that managers are former programmers and can sometimes be interns. But people are always managed by someone who could do their job. 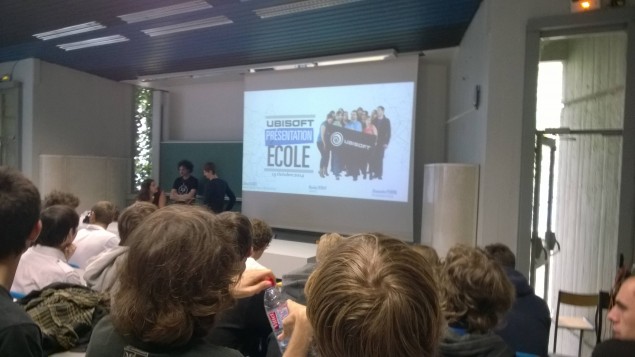 Not asked, but worth mentionning :

The Game Architect said that they try to re-use code as much as possible. So that’s maybe what happened with the AI in Watch Dogs which was taken from AC.

“Are you aware of the negative response to the recent decision to lock your games (like AC:Unity) into 30 frames per second? If so, what do you think about that?” u/TwinDragonsOfChaos

I asked this question at the end of the presentation, everyone laughed. The Game Architect said that on consoles, and for this type of game, they have to chose between graphical fidelity and smoothness. He implied that MS is making them lock the framerate on PC too. Then, he smiled, said “But our eyes can’t see past 24 fps anyway” and winked at me.

“Then maybe ask about the impact of AI on these APUs in the consoles.”

They said they have to use Microsoft’s cloud instead of the APU to do the AI in certain games due to hardware limitations.

“You can also ask what is the preferred platform to develop for.”

PC, because they have to use specific languages and debuggers for each console and then validate the game with the constructor.

“You should ask them if they get any say in what the PR people are telling us.”

They don’t. Clearly the two engineers were no peasants, but they were asked questions they could not answer. He only implied that there were hardware limitations all over the place. And his wink when he told me that 24fps was all we needed confirmed that.

“Do people who work for Ubisoft have mobility ? Can they work abroad if they want or change their career path ?” (question from a classmate)

Yes, engineers can become managers and vice-versa, they can also fill openings in other studios, or change teams.