Microsoft Hits $1 Trillion Market Cap Thanks to Azure, but Gaming Below Expectations

Microsoft (NASDAQ:MSFT) has delivered their results for the three months ending March 31, 2019, and the quarter was an across-the-board success for the tech giant. Microsoft raked in revenue of $30.6 billion and net income of $8.8 billion during the quarter, a 14 percent year on year increase for revenue and 19 percent increase for income. Earnings per share were $1.14, which is above the $1.00 per share analysts were expecting. Overall, it was a brag-worthy quarter, with all three of Microsoft’s business divisions reporting impressive numbers. As of the writing of this article, Microsoft stock has jumped around 3 percent in after-hours trading, boosting the company’s market cap above $1 trillion. 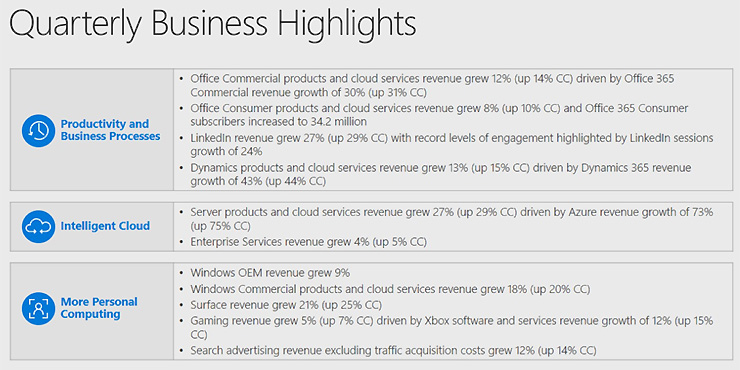 More Riches from the Cloud

As has become tradition for these quarterly reports, Microsoft’s Intelligent Cloud division was the big highlight for the company. Intelligent Cloud revenue was $9.7 billion, driven by a 73 percent year-on-year increase in Azure business, which is just slightly down from the 76 percent Azure grew in Q2 2019. Azure’s period of wild, exponential growth may be tapering off ever so slightly, but it should continue to be bright spot for years to come as Microsoft continues to lock down various long-term corporate partnerships. The cloud-based Office 365 also continues to be a source of strength, growing 30 percent year-on-year, and the planned xCloud game streaming service ought to be another reliable source of revenue.

For some time Microsoft’s Surface tablets were somewhat an albatross, but they were actually one of the highlights of the company’s Q2 2019 holiday quarter, and they continued to sell well in Q3. Surface revenue was up 21 percent year on year, due to continued sales of 2018’s new Surface Pro 6 and Surface Laptop 2. The Surface line should get another boost later this year with the release of the new Surface Hub 2S and Surface Hub 2X.

The one significant blemish on Microsoft’s spreadsheet last quarter was dependable old Windows, with OEM Pro revenue down 5 percent and non-Pro revenue down a worrying 11 percent. Microsoft blamed this on competition from Chromebooks and chip delays cutting into the sales of PCs and Windows. Well, it seems those chip issues have been resolved, because Window OEM revenue was up 9 percent and non-Pro revenue was up 18 percent year-on-year.

Microsoft’s Xbox gaming division was up 5 percent compared to Q3 2018, thanks to a 12 percent increase in revenue from services like Xbox Live Gold and Xbox Game Pass. Microsoft now has 63 million Xbox Live subscribers, a number that should continue to grow as they bring the service to other platforms like iOS and Android. This may all sound good, but Xbox revenue actually fell below Microsoft’s expectations according to company CFO Amy Hood, largely due to disappointing monetization from both first and third party titles. Things are likely to get worse before they get better, as Microsoft expects gaming revenue to be down year-on-year in Q4 as the Xbox One begins to wind down. 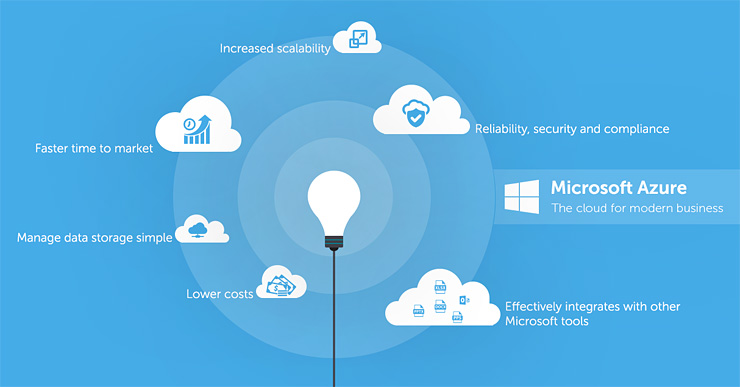 Firing on all Cylinders

It’s difficult to find anything negative to say about Microsoft’s Q3 performance or future, as this is clearly a company that’s firing on all cylinders. Yes, the Xbox division isn’t as strong as it could be, but it’s going through a rebuilding phase, with significant investments being made that should pay off in the future. During Microsoft’s earnings call, Amy Hood identified what the key drivers will be going forward…

“Assuming the macro environment remains consistent, many of the key drivers of our business should remain intact. Revenue growth will continue to be driven by the transition to cloud services. Within our commercial business, strong execution should drive continued high-teens growth in our server products and cloud services. Office 365, Dynamics 365, and LinkedIn should also continue to drive double-digit revenue growth in our productivity and business processes segment.”

Microsoft’s outlook for the rest of 2019  remains steady, with the company expecting between $32.2 billion and $32.9 billion in revenue in Q3. Given how smoothly the Microsoft money machine is currently running, it seems very likely they’ll meet and exceed those estimates.