[Updated] Metal Gear Solid V: The Phantom Pain Gets its First Official Review; Praised for Best Gameplay in the Series

[Update] Metal Gear Solid V: The Phantom Pain has been gathering rave reviews from all major publications, including 10/10 scores from both IGN and Gamespot. The title currently sits at a 95% at Metacritic.

God is a Geek states:

Metal Gear Solid V: The Phantom Pain has an official release of September 1, 2015, and the review embargo lifts this Sunday. With a review event currently underway in Los Angeles, various members of the press are getting their review copies.

Metal Gear Solid V: The Phantom Pain gets awarded with an impressive score and praised for its gameplay

It appears that one review has already been leaked. French magazine 'JeuxVideo' has awarded Hideo Kojima's final Metal Gear Solid title with an impressive verdict of 17/20, as can be seen in the image below. 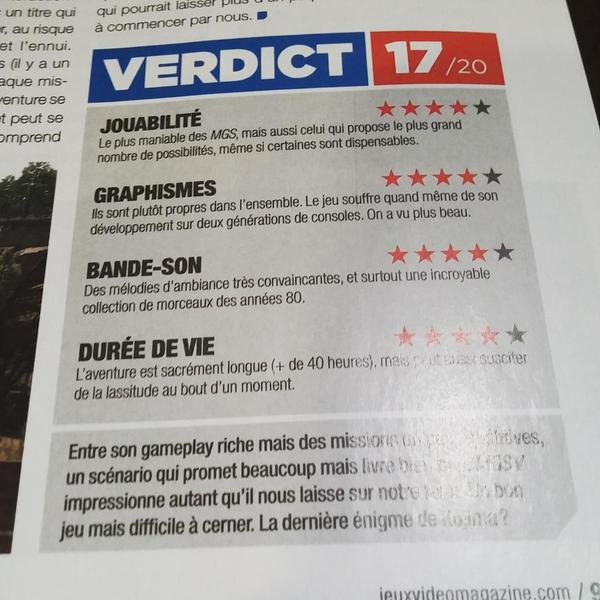 The breakdown of their score is as follows:

A translation of the summary was provided by NeoGAF user GhostTrick.

The Metal Gear game with the best gameplay, and with the most possibilities even though some aren’t that useful.

Game looks clean. Although, it clearly shows its crossgen roots. Not the best looking game.

A lot of tracks from the 80s and a nice sound ambiance.

A long playthrough (more than 40 hours) but one that can be tedious at times.

The magazine characterises Metal Gear Solid V: The Phantom Pain as having the best gameplay in the series, although reports that the graphics are a bit underwhelming compared to other current-gen offerings. With a huge game like Phantom Pain, it is understandable that some of the missions might feel tedious to some, as JeuxVideo characterises their playthrough of 40+ hours, of sometimes being just that.

Konami has recently released some comparison screenshots between the PC and PlayStation 4 version of the Metal Gear Solid V: The Phantom Pain. The higher resolution textures, better shadows and higher draw distance of the PC version is quite apparent as can be viewed in the screenshots here.

Regardless of the impressions of the French publication, we will be getting more reviews of the title, as soon as the review embargo lifts on Sunday, so we will keep you updated with any new information.

The game won a plethora of awards and nominations at E3 2015, including IGN’s Game of the Show, Gamespot’s Best of E3, Polygon’s Editor’s Choice and many more. The full list of nomination and awards can be viewed here.