Metal Gear Solid V: The Phantom Pain went down a storm at E3 – one of the biggest games expos in the world. The title, which is to be released worldwide on September 1st, received a plethora of nominations and awards, including IGN’s Game of the Show, Gamespot’s Best of E3, Polygon’s Editor’s Choice and many more. 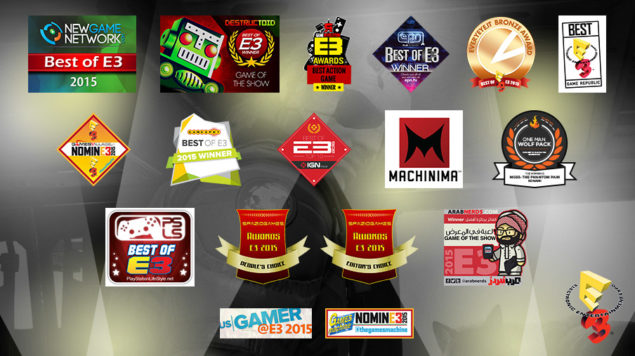 Konami has listed them all in an official press release, which can be viewed below:

Konami Digital Entertainment, Inc. announces that METAL GEAR SOLID V: THE PHANTOM PAIN received top honors at this year’s Electronic Entertainment Expo (E3) 2015 as one of the world’s most celebrated games during the industry’s leading event. Konami’s highly anticipated title received numerous nods, including the coveted “Best of E3” awards from top media outlets such as IGN, GameSpot and Polygon.

Below is a full list of Konami’s E3 awards and nominations for METAL GEAR SOLID V: THE PHANTOM PAIN:

Destructoid – Game of the Show*

IGN – Game of the Show

Metal Gear Solid V: The Phantom Pain is scheduled to release on September 1, 2015 for PlayStation 3, PlayStation 4, Xbox 360 and Xbox One. We will bring you any new information as soon as it becomes available.