The Metal Gear Solid V: The Phantom Pain’s pre-order page on the PlayStation Store has revealed that the game has optional in-game microtransactions.

As you can be seen in the image below, the italian page says “Acquisti in-game opzionali”, that translates to “Optional in-game purchases”. 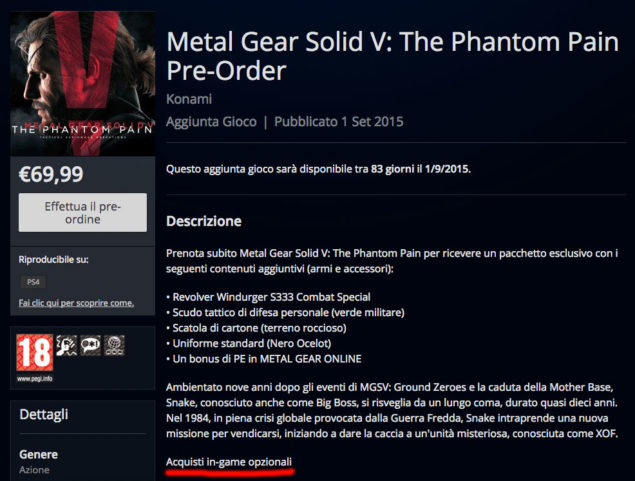 There are no further details as to what the microtransactions could be related to, but hopefully they are entirely optional and do not have an impact in the overall gaming experience.

Metal Gear Solid V: The Phantom Pain will be available on 1st September for PS4, PS3, Xbox One and Xbox 360 and on 15th September for PC (only via Steam).

Metal Gear Solid V: The Phantom Pain is surely going to be a very controversial game

Both because of the themes it tackles as well as because of the buzz surrounding it, caused by the Konami/Kojima dispute and the alleged transplant doctor controversies. Additionally, David Hayter, long time voice actor of Solid Snake and Big Boss got replaced by Kiefer Sutherland. A strange theory is floating around claiming that Hayter will be back as Solid Snake.

Last year, the voice actor of Raiden, Quinton Flynn hinted that Hayter will still be Solid Snake and Sutherland is only taking up the role of Big Boss. In a recent interview with Yong Yea, Flynn shared his thoughts:

“In fact a petition went around, not only did I sign, I wrote a letter of support for David. He’s brilliant, he’s a good friend, I love him. He deserves the role, he originated it. I supported that. As we know, in any kind of business there’s more to the story that we don’t know. So it had to be some kind of a business decision. “Why?” I don’t know, I don’t know that I’ll ever know. Only David know. Hideo knows. They probably know more than Kiefer knows. I think he got the job and I’m sure he was happy to do it. I’ve not heard what he’s done at all. I don’t have any insider information. But he’s Kiefer Sutherland, so I can imagine what it’ll sound like and I’m sure it’ll be fine…whatever.”

Kojima previously stated that Sutherland was brought in for Metal Gear Solid V because they wanted to convey emotions not only through dialogue but through facial gestures as well, suggesting that this was more a creative decision.

Flynn is convinced that Sutherland will indeed deliver a capable performance in The Phantom Pain.

“Kiefer, you may not know me, but I love you buddy. I’m a big fan, and I do also know Kiefer is a musician. He told me about the club he had, I don’t know if he still has it. Everything I’ve gotten from Kiefer as an actor and from interviews I’ve seen, he seems like a stand up guy, a genuine guy. I’m sure he’s going to do quite a capable performance. I don’t have any problem with him. It’s a decision that is above and beyond us, and that’s what happens in this business. I’ve replaced actors, actors have replaced me. It’s just a part of the game.”

Konami promised to clarify things about Hideo Kojima in the future. Kojima's name is still included in the game’s credits.