You may have remembered that details had leaked which  confirmed the GTX 750 Ti as a Maxwell GPU and a launch date of February. However new information has surfaced which actually puts the GTX 750 Ti ( A Maxwell GPU mind you) about 10% behind the GTX 660 in terms of performance.

The benches comes from a source (Coolaler) we have never used before so do take this with a grain of salt, infact the only reason i am even posting this; is because i have no way of verifying it as a fake either. Without any further ado here are the posted benches: 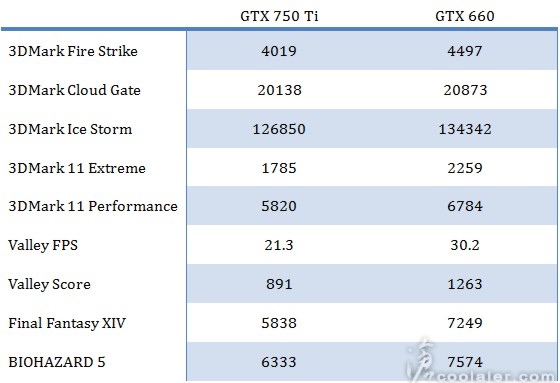 According to these benchmarks the GTX 750 Ti is approximately 10 - 15% slower than the GTX 660. However note that every single one of these benchmarks are Single Precision in nature, while i have seen advances in SP through the generations. Nothing has seriously impressed me after Fermi. It is Maxwell's Double Precision i want to see. It also strikes us as very odd that Nvidia would launch the revolutionary Maxwell with such a low powered card ( if of course these benches are true at all.)

Thankyou Videocardz for breaking the news.