Fans of Rockstar’s best-selling open world action-adventure video game known as GTA V must be overjoyed nowadays, all thanks to the PC modding community. Since its launch on PC earlier this year, GTA V has been spruced up with a number of unique mods that add great features and make the game more engaging and fun to play. Here’s another amazing mod that is probably one of the best yet. It puts a full-scale reaper ship from EA’s Mass Effect 3 right over the city of Los Santos. 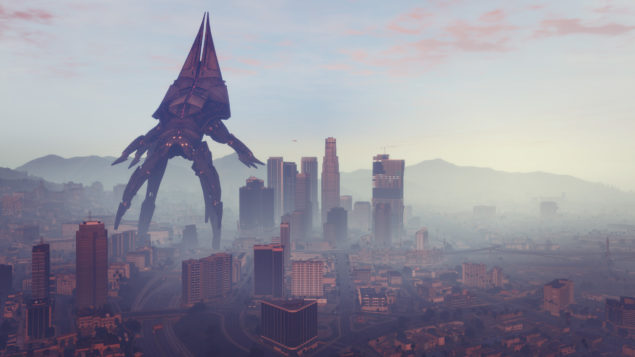 GTA V mods keep coming on PC, and the latest one is a treat especially for fans of Mass Effect, EA’s most critically acclaimed sci-fi action role-playing third-person shooter video game series. The newly released mod replaces the blimp that floats around in the game with a gigantic Reaper ship from Mass Effect 3. The creator, JJxOracle, says the mod is currently in beta, and the listing on GTA 5 Mods notes that it is affected with some bugs. The Reaper lacks proper collision detection at the moment, which means players will pass right through it. It also disappears entirely at times, and its legs touch the ground when it’s moving. But all that doesn’t many it look any less terrifying hovering over Los Santos.

As it comes as a replacement for the blimp, players can fly the Reaper around the city. Although the cockpit view comes with no major changes and looks quite similar to the usual view. You can check out the screenshots and videos shared by the creator showcasing the Reaper in action here. Reddit user Berdu captured some beautiful screenshots in Rockstar Editor showcasing the Reaper drifting in the sky. You can check out the full size images here on Flickr. If you want to give it a shot yourself, download the mod from here.