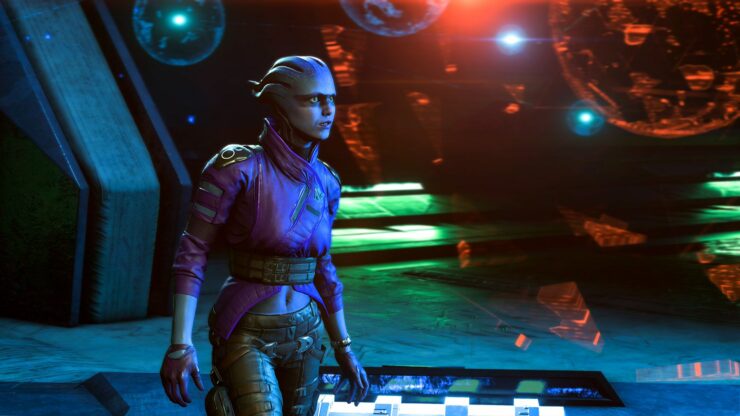 Mass Effect Andromeda is coming to Sony’s latest, powerful PlayStation 4 Pro console, it was announced today during Sony’s PlayStation event held at the PlayStation Theater in New York City. This obviously means that the upcoming action role-playing third-person shooter game will deliver true 4K gameplay experience further enhanced with HDR lighting, and if you were wondering how would that look, Electronic Arts and BioWare has got you covered. The game will have HDR10 support (Dolby Vision on PC).

Today at the PlayStation Meeting, BioWare showcased first proper Mass Effect Andromeda gameplay running on the newly-announced PlayStation 4 Pro in 4K. In the video, you can see an armored character, apparently the new protagonist Ryder, exploring a dimly lit vault left behind by the Remnant alien race. The character uses jetpack to navigate the area and scans objects for information. The character and his squadmates then encounter the aliens that look like advanced air squids.

You can check out the trailer below featuring Aaryn Flynn, general manager at BioWare. In the video, Flynn explains how the studio is using the Frostbite engine to get the most out of PlayStation 4 Pro with Mass Effect Andromeda. While commentating, Flynn points out that BioWare will premier a brand new Mass Effect: Andromeda trailer on November 7 and "officially open the doors to the next chapter of the Mass Effect universe." If you don’t already know, November 7 is N7 Day, on which BioWare celebrates its sci-fi franchise.

Mass Effect: Andromeda doesn’t follow the story from the original trilogy. The game features a new protagonist who has been tasked with discovering a new planet in the Andromeda Galaxy for human race to colonize. The game was originally scheduled to hit the store shelves in 2016, but BioWare delayed it to make sure the developer delivers “everything the game can be and should be.” It is now expected to come out in early 2017.