Marvel’s Avengers doesn’t launch until September, but eager superhero fans will be able to get a preview of the action via a series of betas in August. When you’ll be to jump in depends on whether you’ve pre-ordered the game and what platform you plan to play on. Here’s the full rundown: 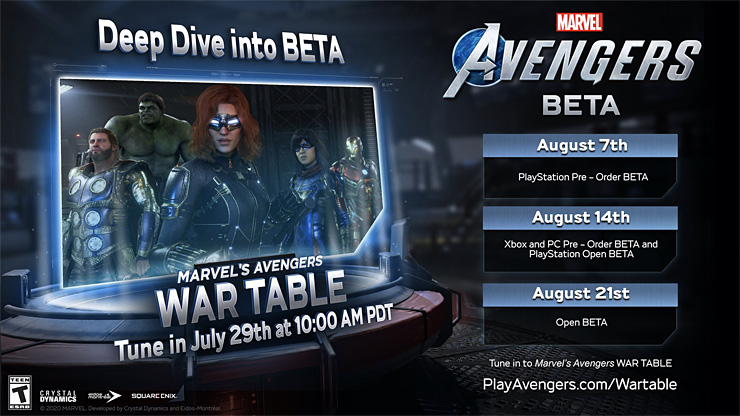 Square Enix has yet to reveal how long each of these beta sessions will be. The Avengers beta will offer a sampling of what to expect from the game, including single-player campaign and co-op content. Here’s Marvel’s Avengers creative director Shaun Escayg on what players will be getting…

We built the beta in such a way that you can experience most of things that you’ll be doing in the full game. That means playing a piece of the original single-player Avengers story campaign, fighting through co-op missions, experiencing hero and world progression, and exploring War Zones and DROP ZONES, a new kind of mission we’ll talk about in the upcoming War Table stream. This beta is meaty, but it’s only a small part of the finished game.

Haven’t been keeping up with Marvel’s Avengers? Here’s a basic rundown of the game:

Marvel’s Avengers is an epic, third-person, action-adventure game that combines an original, cinematic story with single-player and co-operative gameplay. Assemble into a team of up to four players online, master extraordinary abilities, customize a roster of Heroes, and defend the Earth from escalating threats.

Marvel’s Avengers will arrive on PC, Xbox One, and PS4 on September 4. The game is also coming to Xbox Series X and PS5. A new Avengers War Table presentation will reveal new details about the game on July 29.