Marvel vs. Capcom 4 Leaked Logo Is Not Real; Might Be A PlayStation 4 Console Exclusive Release 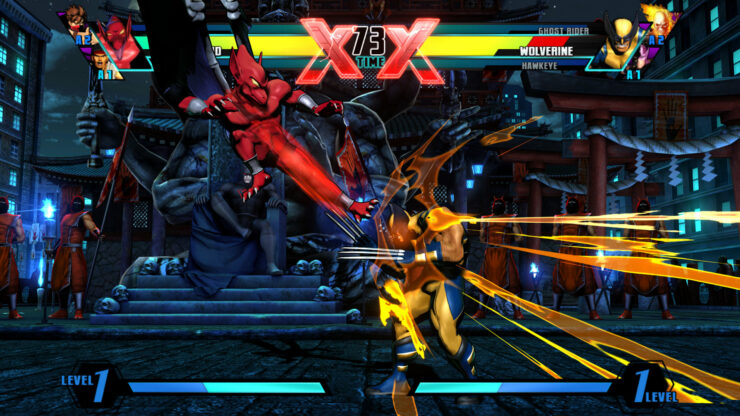 A few days ago, rumors regarding a new entry of the Marvel vs. Capcom 4 series started circulating online, with a logo also leaking online. While Capcom is strongly denying that Marvel VS Capcom 4 is in development, so we won't know if the game is indeed real until next week, we have learned that the leaked logo is indeed fake.

A few hours ago, NeoGAF forums member David_hayter confirmed that he is the one behind the logo, providing some work-in-progress screenshots as proof.

Confession time
I designed the “4” teaser logo poster. I designed it because of all the rumors of MVC4 so I thought it would be fun to design a fake logo teaser. I went to my sketchbook and just started drawing bunch of 4s logos that would fit in the “VS” game franchise. I then took the sketch into Illustrator to vector it and prepped it for 3D. I saw lot of criticism that the 4 shape had terrible of misalignment which I overlooked when rushing to get the teaser out. I spent like 1hr tops on it and thought it would be fun to post it. Didn’t know bunch of people would tweet it or blogs using it in their articles. It was just a logo 3d extruded with a metal texture. People knew it was fake off the bat but was surprised blogs that it was real. I wish I would’ve spent more time to refine it to make it believable...oh well. I’m happy it spread around like it did. It should show Capcom that people really want MVC4

my shit is fake but i hope MVC4 isnt.

According to rumors, Marvel vs. Capcom 4 is getting announced this week at the PlayStation Experience 2016, but it's not yet clear if the game will be a PlayStation 4 exclusive or a multi-platform release like the previous entries. According to NeoGAF user SneakersSO, there's a good chance that it may be a PlayStation 4 console exclusive, which would definitely be disappointing for Xbox One owners.

To those wondering if its exclusive or not - when I FIRST heard about this (about 1.5 years ago or so), while it wasn't specified as Marvel 4, I was told Sony had signed a deal with Capcom for a new Vs. game, and this was after SFV had been announced. So yeah, take with a grain of salt, but I fully expect it to be exclusive.

User OsirisBlack, who revealed PlayStation 4 Pro details before the console's unveiling, also chimed in on the matter, saying that he did hear about the game being in development, but his sources are not clear on the exclusivity matter.

Not surprised as I had heard this was a thing did we get any confirmation on exclusivity? If this is Ps4 / PC only that's going to be a swift kick in the balls to xb owners. I've checked and the people I know either don't know or aren't willing to say.

As it usually is, we must take everything with a grain of salt. Thankfully, the PlayStation Experience 2016 isn't all that far off, so it won't take too long to finally know more about Marvel vs. Capcom 4.