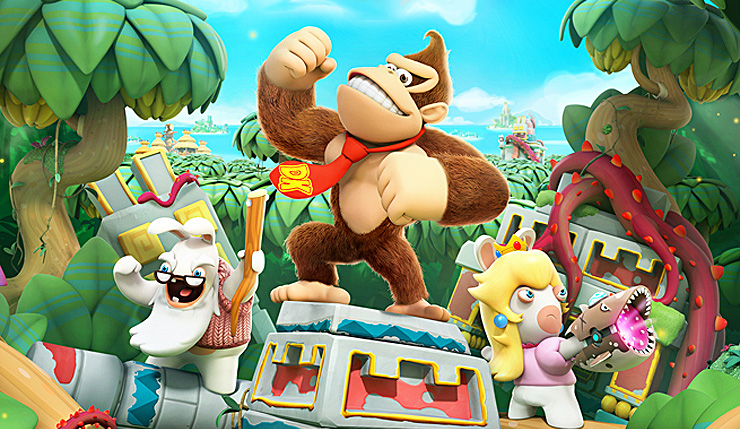 Back in January, Nintendo and Ubisoft announced Mario + Rabbids Kingdom Battle would be getting a Donkey-Kong-themed expansion this year, and now they’ve revealed a whole lot more about the DLC. Mario + Rabbids Kingdom Battle: Donkey Kong Adventure (yeesh, that’s a bit of a mouthful) is a surprisingly substantial update, featuring a full Donkey-Kong-Country-inspired world featuring five distinct zones, and two new characters – Donkey Kong, and Rabbid Cranky. Yes, a Rabbid version of Cranky Kong is now a thing that exists. What a time to be alive. Check out a new Donkey Kong Adventure trailer, below.

Ubisoft has also provided a full rundown of Donkey Kong and Rabbid Cranky’s powers, as well as some of the new DK-themed elements and enemies you’ll encounter.

Donkey Kong comes equipped with the Bwananarang as a primary attack, capable of hitting multiple enemies in a single toss, as well as his trademark DK ground pound, which can do serious damage to enemies in close range. Naturally, his two abilities are tied to his primary and secondary attacks. Similar to Mario's Hero Sight or Luigi's Steely Stare, Hairy Eye makes DK target and attack any enemy that moves within range of his Bwananarang. Meanwhile, Magnet Groove gets DK to bust out his bongos to lure enemies in closer for a ground pound, or out from of cover so he can get a clear shot.

Donkey Kong can throw almost anything on the map, starting with cover positions -- uproot a half- or full-cover and not only do you deny your enemies shelter, you can lob the shelter to damage them!

Rabbid Cranky carries a Boombow, which packs a serious punch as a close-range, wide-spread weapon. What it lacks in distance is made up for by Rabbid Cranky's Barrel Bolt, which can lob a single shot into a general area at distance, and even over cover, to damage multiple enemies thanks to its Area of Damage bonus. His Long Story skill puts enemies within range to sleep, allowing him to get the jump on them. Likewise, if an enemy tries to get the drop on him and they're in range, Rabbid Cranky's Stink Eye skill will give them a blast of the Boombow on the way to their destination. Lastly, any time Rabbid Cranky performs a team jump in range of an enemy, he can rain down Boombow blasts from above.

In addition to DK and Cranky, your team will be rounded out by Rabbid Peach. It seems these three are the only characters available – you can’t choose your team like in the core game. That limitation aside, Donkey Kong Adventure certainly looks like a fun, fully-fleshed-out add-on.