If you've been excited to those that are waiting patiently for Mafia 3 might be excited to hear that domain names associated to Mafia 3 have finally been registered by Take-Two Interactive. This very well could mean that some kind of announcement is truly imminent. 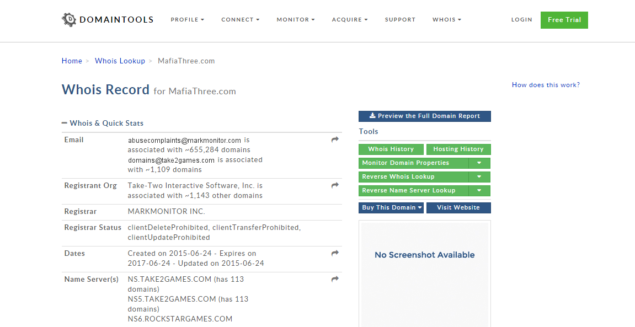 While it's easy to fake a domain registration, in this case the changes are indeed associated to accounts owned by Take-Two Interactive with all the information lining up with their other domains.

Securing domains well ahead of time isn't unheard of either, though generally they aren't registered so far in advance as to completely throw off consumers, unless development falters. The general rule is to secure it before popularity causes others to register it or to simply give enough time for web development.

Back in January of 2015 Rick Pasqualone, the voice actor for the primary protagonist of Mafia 2, teased that there might just be an announcement coming quite soon. Nothing quite materialized as we had hoped, though we have heard of another rumor from Rick Pasqualone that suggests we might see it revealed at Gamescon. Registering now would make sense so that they can prep the website in time for that reveal.

What we do know is that Mafia 3 is likely set in Louisiana with three new characters added to the foray. This is based on a casting call by 2K games, though the details could have been fabricated to hide the real story.

Hopefully we see something, even a reveal trailer not set in-game, at Gamescon in Cologne Germany in August. Mafia 3 is an unorthodox franchise, much like GTA, and has quite the following. It'll be exciting to see how they evolve their franchise.