Apple could be upgrading its MacBook Air lineup, but as far as changes go, those details are currently hidden in the mist. However, when it says a minor upgrade, we have a few things in mind that could help the tech giant bolster its sales.

MacBook Air Refresh Could Come With A Type-C USB Port, But 11-Inch Model Could Be Removed From The Family

When they talk about minor upgrades, the company has developed an affinity towards Type-C USB ports, and aside from possibly being incorporated on the company’s MacBook Pro 2016 family, the 13-inch MacBook Air refresh could actually feature such connectivity. Apple has already stated that the base model of the 13-inch MacBook Air features 8GB of RAM, showing that the company still gives adequate love towards this lineup. What a minor upgrade could mean to some, could actually prove as a blessing to a ton of consumers. 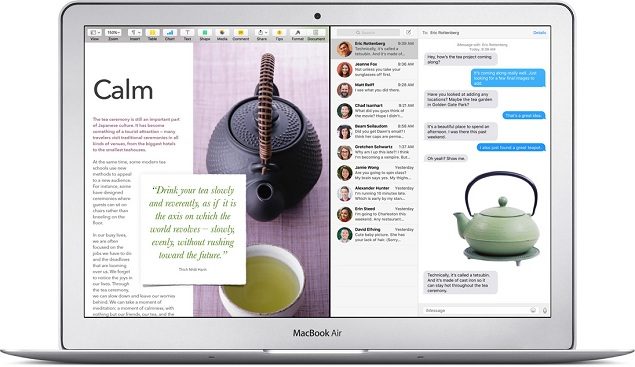 As for the rest of the specifications introduced by Apple when announcing its MacBook Air before WWDC 2016, the starting hardware features a 128GB PCIe flash storage, and can be configured all the way up to 512GB, if you require that much space. The 8GB of LPDDR3 RAM will be running at a speed of 1600MHz, and will give you more headroom in carrying out the more demanding tasks.

As for the processor, MacBook Air starts with a dual-core Core i5 chip running at a speed of 1.6GHz. The Turbo Boost technology of Intel’s processors will force the chip’s frequency to shoot up to 2.70GHz when required and the highest configured model features a Core i7 chip with a base clock speed of 2.2GHz. As for the battery life rating, Apple has stated the details below:

The integrated graphics chip is an Intel HD Graphics 6000 and it provides support for a dual display and video mirroring. Another feature that comes along with it is the simultaneous support of full native resolution on the built-in display and up to 3840 by 2160 pixels on an external display. Unlike the 12-inch MacBook, the 13-inch MacBook Air features a multitude of connectors, and they have been listed below:

With the MacBook Air already improved thoroughly, we expect that this minor upgrade will definitely up the functionality of the upcoming notebook. What do you guys feel will be a part of the notebook? Let us know your thoughts right away.