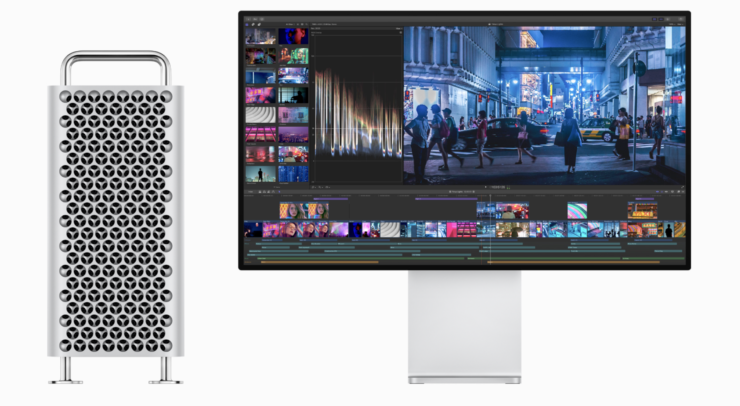 When Apple launched the Mac Pro all these years back, the company tried to bring its prowess with design to the professional workspace. However, the Mac Pro became one of the rare products from Apple for which the company admitted that it had failed to foresee industry trends. As a result, Apple was forced to issue an apology and promise its professional users that the company would soon make up for previous errors. Well, the Mac Pro is here once again, and this time Apple's launched a well-rounded product. Take a look below for more details.

Apple Launches The Mac Pro With 28 Core Intel Xeon Processor, Up To 1.5TB Of RAM And Support For AMD Radeon Pro 580X

Apple's approach with the Mac Pro today once again combines the company's penchant for design and hardware. The Mac Pro has a stainless steel frame that can easily be lifted up to allow for easy access to its internals. Apple's also crafted a lattice pattern at the sides of the rig to allow easy airflow from its front to the back.

The Mac Pro's design now allows PCI expansion and the workstation has eight internal PCI slots. Four of these are double wide, three are single wide and one is 'half length' and it features an IO card from Apple. This card has two Thunderbolt three ports, two 10-bit ethernet ports and two USB-A ports.

Moving towards the processor, the Mac Pro starts from an eight-core Intel Xeon processor, and the workstation can be configured to run on up to 28 cores. The system has 1400 Watts of power and its fans can generate 300 cubic feet of airflow per minute for cooling purposes.

The rig also supports six-channel 2933MHz ECC memory in 12 DIMM slots, allowing for a total capacity of 1.5TB. The Mac Pro can also achieve up to 56 Tflops of output, and Apple paid a special focus to the system's graphics capability at the WWDC today. This is the courtesy of Apple's APX graphics module with 500W and Thunderbolt support.

GPU options for the MacPro start from AMD's Radeon 580X and go all the way up to the Radeon Pro Vega II. The aforementioned 56 teraflops of output is achieved by equipping the Mac Pro with two APX modules, which allows two Vega IIs on the rig, for a combined output of 56 teraflops.

To expand the Mac Pro ecosystem, and to learn from the past, Apple also introduced its custom expansion card for the Mac Pro earlier today. This card, dubbed as 'Afterburner', is an FPGA ASIC that capable of decoding 6.3 billion pixels per second. It can also handle 12 streams of 4K video and 3 streams of 8K video.

The standard version of the Mac Pro will feature an eight core Intel Xeon processor that's coupled with 256GB of SSD storage and 32GB of RAM at a $5,999 price tag. Thoughts? Let us know what you think in the comments section below and stay tuned. We'll keep you updated on the latest.