Drive a Tank on the Moon in World of Tanks for Xbox 360, Lunar Mode

To commemorate the 46th anniversary of one of the most incredible feats of human ingenuity and engineering, the Apollo 11 mission, Wargaming.net is kicking off another 'Tanks on the Moon' event. 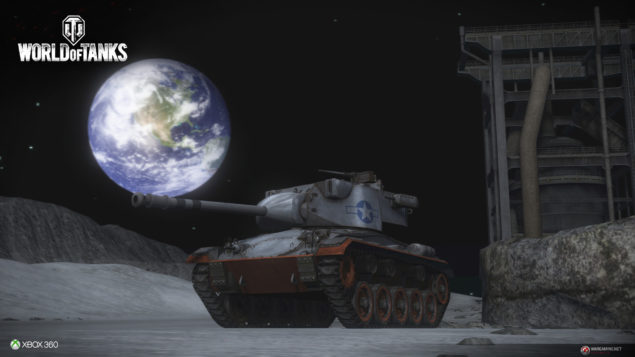 Fry your enemies with lasers on the moon in an Xbox 360 only World of Tanks event, Lunar Mode.

Lunar Mode is back and better than ever. Something that started as an April fools joke this year has evolved into a splendid idea to honor a fantastic human achievement. The actual Lunar Mode will be available starting on July 20th and only for the Xbox 360.

Unlike the April Fools oeuvre, everything you do in Lunar Mode will effect your player stats. As soon as you log in, you'll be greeted with an M24 Lunar model designed specifically to be able to survive and fight in a vacuum. The best part is the 37mm laser canon. Lasers make everything better.

To give players more incentive to come log-in are special chained operation challenges linked to the Moon maps. You'll also find some discounts and other great bundles in the shop as part of their Mid July event.

World of Tanks is a very popular arcade style tank simulator with a surprising amount of realism. Recently World of Tanks was released on the Xbox One, modernizing the console experience and bringing some novel multiplayer cross-play between both generations of consoles. Update 9.9 has improved the graphics, UI and the whole experience.

Now we get lasers and low gravity to make tank battles truly epic in their Lunar Mode. Why not take a look on the 20th, it's free. At the moment it's Xbox 360 only, but perhaps that'll change. We'll be ready with any information as it becomes available.