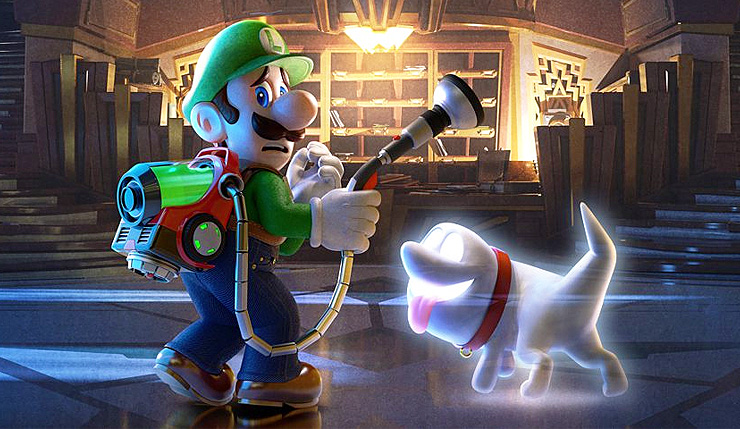 Eager to bust out the ol' Poltergust for another round of ghost hunting? Well, you won't have to wait too long, because Nintendo has just announced a rather appropriate release date for Luigi's Mansion 3 – the green guy's latest spooky adventure drops this coming Halloween! You can check out a brief new teaser trailer, below.

When Luigi’s friends go missing on vacation, it’s up to our reluctant hero to save them from the ghosts in the Last Resort hotel! Join forces with Gooigi, slam ghosts, & prepare for a spooky treat when #LuigisMansion3 arrives to #NintendoSwitch on 10/31!https://t.co/3fg4O2t6PB pic.twitter.com/iNM9BKNKg5

Haven't been keeping up with Luigi's Mansion 3? In addition to giving the series a new HD coat of paint, it adds co-op play to the mix with the gelatinous new sidekick, Gooigi. I recently got to go hands-on with Luigi's latest and ask Nintendo a few questions about the game's varied world, multiplayer modes, and...what flavor Gooigi is? Check out the full interview here, and some of my thoughts on the game, below.

Luigi’s Mansion 3 developer Next Level Games have produced another very-nice-looking game. Perhaps not in terms of pure numbers of polygons pushed, but the game drips with personality. As in past entries in the series, Luigi’s feels like a living, breathing character, with all sorts of little quirks, ticks, and unique animations.

Luigi’s Mansion 3 doesn’t look to reinvent the wheel, opting for a number of small refinements to the series’ formula. That isn’t necessarily a bad thing – despite it’s reputation, Luigi’s Mansion was always a fun, unique experience, and this latest entry in the series ought to make busters feel good all over again.

Luigi's Mansion 3 sneaks onto the Nintendo Switch on October 31. What do you think? Does Luigi's latest look like a Halloween trick or treat?