A New set of screenshots has been released for the gorgeous looking Unreal Engine 4 game , The Lost Pisces, developed by Sirenum. The Lost Pisces, is an action adventure title, currently in development for the PC and Xbox One. In an interview with OnlySP, Dan Rutkowski shares some very interesting details  about Pisces. 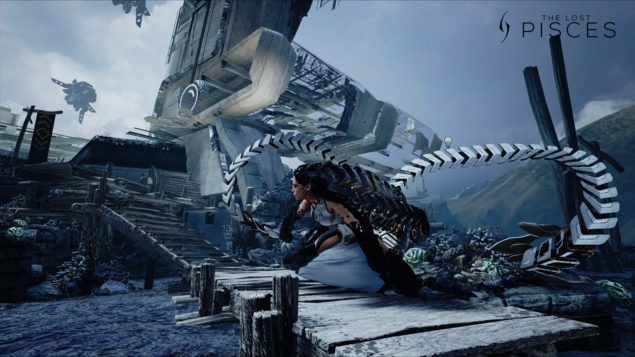 “It’s a different type of game, it’s an experiment, but it’s a game nonetheless,” says Dan Rutkowski, artist and designer at Sirenum.

“PISCES is an experiment in connecting a gamer with an artificial intelligence. But doing it on a level that people haven’t tried before, that’s a basic wrap up of it.”

Dan Rutkowski, explains that their inspiration for The Lost Pisces comes from the Hans Christian Andersen classic The Little Mermaid.

“It’s this reimagining of Hans Cristian Andersen’s The Little Mermaid, where we take the literal mermaid away and replace her with this machine, this blank slate of a creature that’s just terrified of disappearing one day, and I think that’s something everyone can connect to,” Rutkowski says.

“This is the Hans Christian Andersen version, it’s a little bit darker. The idea behind The Little Mermaid, when he wrote it he had a strictly Christian background, and there’s this notion that nothing except for human beings have souls. So in The Little Mermaid, she’s not really after the Prince necessarily, like in the Disney story, what’s she actually looking for is a soul. So I was naturally attracted to that idea, because it was so in line with artificial intelligence.

“If you follow the story of The Little Mermaid, she’s looking for a soul because she knows at the end of her days, she’ll die and turn into sea-foam. That’s why she goes to the undersea witch, which in this story is actually more of a witchdoctor, rather than having malevolent intentions. So she trades all these things to become human, but the spell has a timeframe and you have to fall in love. But the undertone of trying to attain a soul is a beautiful idea, especially for this coming era of artificial intelligence; this notion of what makes up consciousness and what makes up a soul. It was a natural thing to graft the story of The Little Mermaid into PISCES. The story goes, that PISCES is The Little Mermaid, this machine that’s suddenly found a tiny bit of consciousness and she, no matter what, wants to gain a soul. She becomes terrified that at the end of her days, she might live for 300 years being a machine, but there’s nothing for her to go on to, no possibility of an afterlife.”

The Lost Pisces will feature three different territories, with load points between them. Being an open world game, The Lost Pisces gives the players the freedom to explore the open world as they please, and not having to go down a single path. This goes in line with the premise of the AP in the game, evolving into an independent entity.

“The game takes place across three territories, and there are load points between them, it’s not seamless,” he adds. “The game itself is open-world, in the sense that we’re not making you go down a single path, you’re free to climb all of the rocks that you see there, you’re free to jump in the water and check out all the seaweed and sharks that you want to. The reason for that is, if we keep it too linear it takes away from the idea of ‘what can the AI really adapt to’? If it’s all scripted, that’s not really that interesting.”

The open world nature of The Lost Pisces, allows players to experience the game in their own way, but all possible branches throughout the game lead into one goal.

“If you look at the Telltale games, they use this very intelligent tree that expands in the beginning out to all of these little different branches, and then those branches collapse into one possibility at the end,” Rutkowski says. “There’s lots of different things that you can experience in the game. There is only one way that the game ends, and don’t read The Little Mermaid if you don’t want to know.”

The player and the Pisces AI work together in the game in order to overcome obstacles and traps.

“There’ s these technologies and traps hidden all around the land that you have to venture out and discover, and it’s you and PISCES that have to figure it out together,” he explains. “Ultimately, if you do not find these things, then you’ll be killed by the larger things that are actively hunting you at all times.”

There are action sequences that feature battling and escaping from enemies, but the real emphasis is on the story.

“It’s not necessarily a shooter in the sense of Halo or Modern Warfare, in that you’re not getting into these small dogfights. When comes to battling enemies it’s a large ordeal trying to escape being killed. The story’s really what binds it all together. The action parts are what drives the story forward.

“One of the things that we’re going to show in the KickStarter is how powerful the PISCES character actually is. She can manifest these black shards that float around her and she can cast them out. Those shards can pull across the ground and create massive boulders that you can use to bash against the larger robots. As she turns more and more human, the thing is that she loses that ability, so she becomes weaker and weaker. What will happen is you will see her as more and more human. She’s evolving beyond just being a machine, and you have to take up the slack, up to the gamer’s character.

The character of Pisces in the game, grows and evolves, and the experience for each player is unique.

“Who she becomes and who she is, is very malleable in the game and very personalised to you as a gamer because she’s learned from you,” says Rutkowski to fulfil that role.”

Sirenum's upcoming Kickstarter campaign for The Lost Pisces begins on April 7th. The game is currently under development for the PC and Xbox One. We will bring you any new information of this beautiful and promising Unreal Engine 4 title, as soon as it becomes available. Be sure to check out our previous Unreal Engine 4 posts, here and here.