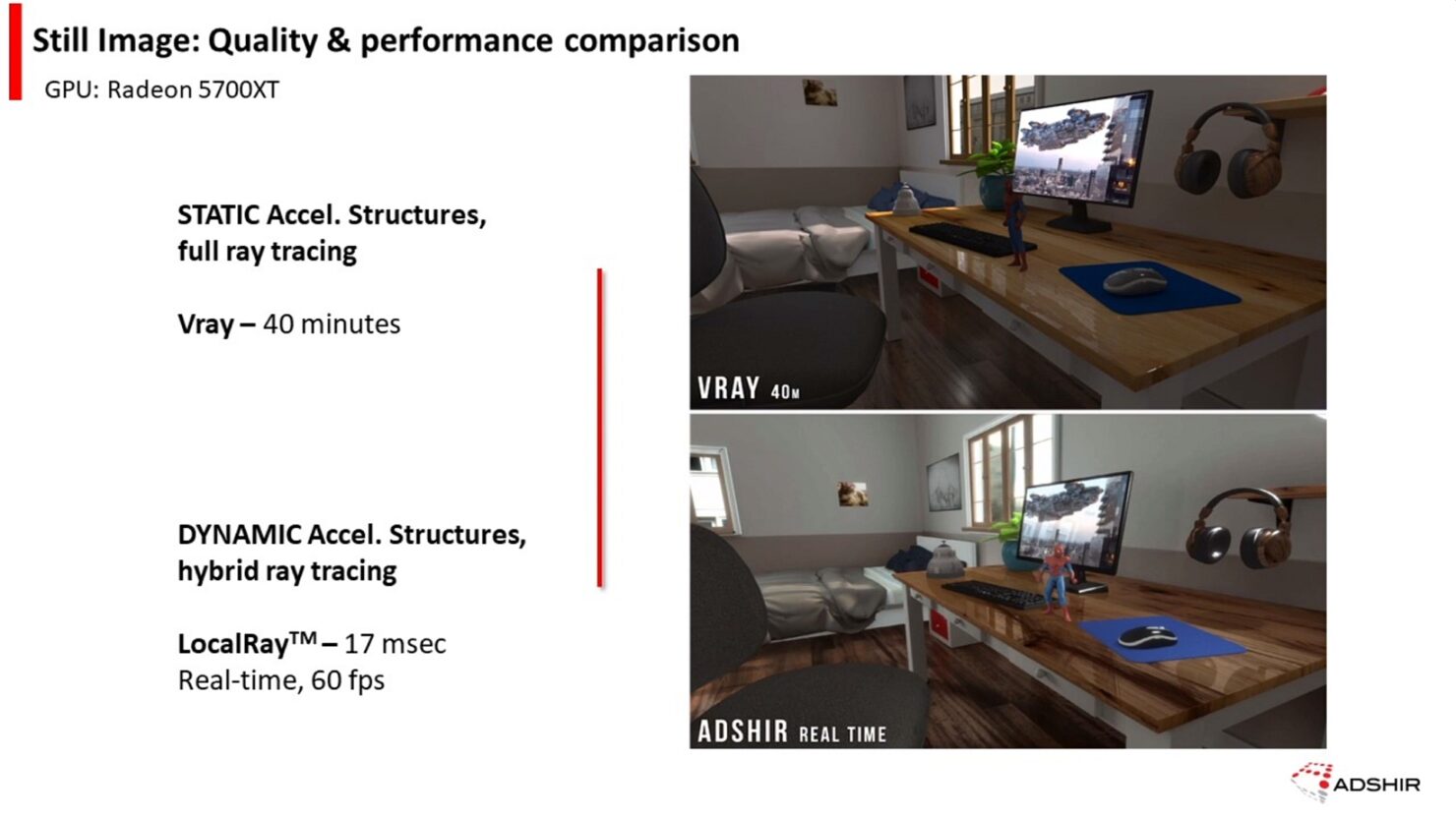 With raytracing set to become a much bigger deal in 2020 thanks to major game releases (Cyberpunk 2077, to name one) and the support of AMD hardware on both PC and next-generation consoles, it is perhaps no wonder that Israeli tech company Adshir is showcasing its LocalRay software at CES 2020.

Adshir was founded a few years ago by Dr. Reuven Bakalash, who previously founded HyperRoll (acquired by Oracle in 2009) and Lucidlogix Technologies (acquired by Google last year). Bakalash has invented several raytracing related patents (you can find five on Google's own patents database) which are now used in LocalRay to achieve an 'algorithmic approach'. This enables a 'proprietary dynamic data structure' that adapts automatically to scene modifications. Other key points to enabling raytracing even on battery-powered (as low as '2W smartphones') were reducing the complexity of ray/polygon intersections and doing essentially 'free' skin animation.

As reported by GamesBeat, LocalRay is entirely cross-platform since it already supports most operating systems (except iOS, which is coming soon). The goal is to enable raytracing even on battery-powered devices as low as '2W smartphones'.

It is unclear yet how LocalRay will be implemented, though. There's the option of licensing the software to be integrated into game development engines such as Unity or Unreal Engine; alternatively, it could be integrated at the device level by hardware makers.

In fact, an interesting statement picked up by GamesBeat makes us wonder. Offir Remez, Executive VP at Adshir, said:

We designed it bottom to go after low-end devices. We have multiple deals across console and mobile sectors, but we are not allowed to talk about it until the second half of the year.

The part about console deals is particularly interesting. Could Adshir's LocalRay be featured in one (or both) next-generation consoles from Sony and Microsoft? This would explain the fact that they are NDA-bound to not talk about these deals until the second half of 2020, which is when we'll likely learn a lot more on both the PlayStation 5 and Xbox Series X hardware configurations.

Meanwhile, you may watch a brief LocalRay demo uploaded yesterday by the company on YouTube; do note that this demo was running on an ASUS ROG laptop powered by a GTX 1080 Max-Q graphics card. For our more technical-minded readers, we also embedded a recent presentation hosted by Dr. Reuven Bakalash at the International Future Computing Summit.