Possibly in response to Sony and Samsung series of Ultra HD 4k televisions, LG has introduced and shipped its brand new series of Ultra High Definition 4k televisions recently. The latest in LG Ultra HD 4k tv series comes in Model No. LA9700 which itself will come in variants of 55 and 65 inch sets.  Whether you need this ridiculously high resolution to watch the available 4k Movies or hook up your gaming rig to get a visually stunning experience, LG’s competitive 4k series will give you something to think about. 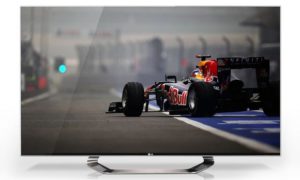 So first there was HD and now there is Ultra HD, what is the big difference? The difference is simply the number of pixels your screen has, the higher the number the sharper and better the visual quality. The LG LA9700 boasts a True-Ultra HD Engine and 3840x2160p screen resolution. In addition the LG Ultra High Definition television sets utilize H.265 HEVC (high efficiency video decoder) which will make the television set future proof for any new 4k standards that may be implemented in the future.

The LA9700 LG Ultra HD 4k tvs ship with a 4.1, 50 Watt sound on a aesthetically designed speaker bar.  The sound quality sounds promising but lets face it, if you are out in the market looking for 4k Ultra HD tvs you will quite definitely be using a home theater system as compared to the TV’s own acoustics.

Though LG’s Ultra HD 4k tv series is going to be widely available to buy soon; It would take quite some time for 4k to become the broadcasting standard and by that time, prices of the Television Sets in question will fall dramatically. Though a 4k TV is available there is not enough 4k Media around for you to fully utilize your product. Besides if you are that loaded, you can go the full mile and buy LG Ultra HD 4k 84 Inch Variant (84LM9600) for a wallet draining amount of $ 19,999