HTC is not the only company prepping up for MWC, something we probably knew already with the likes of Sony and Samsung around. However LG, an underdog still in the smartphone world is rumored to unveil its new Android smartphone that runs on nVidia Tegra 3 platform. Some of the leaked specs puts this phone right on top of the smartphone food chain. Some of the included features are: 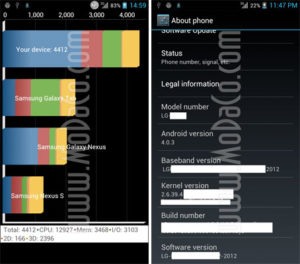 Some of the leaked pictures show a quadrant score of 4412 which is quite unheard of as far as stock devices go. Even the Galaxy S II manages 'only' 3300. The phone will also come with Ice Cream Sandwich on board (Android 4.0.3) so no hollow promises of future updates from LG this time around. MWC is right around the corner and it looks like it's shaping up to be a superphone extravaganza.