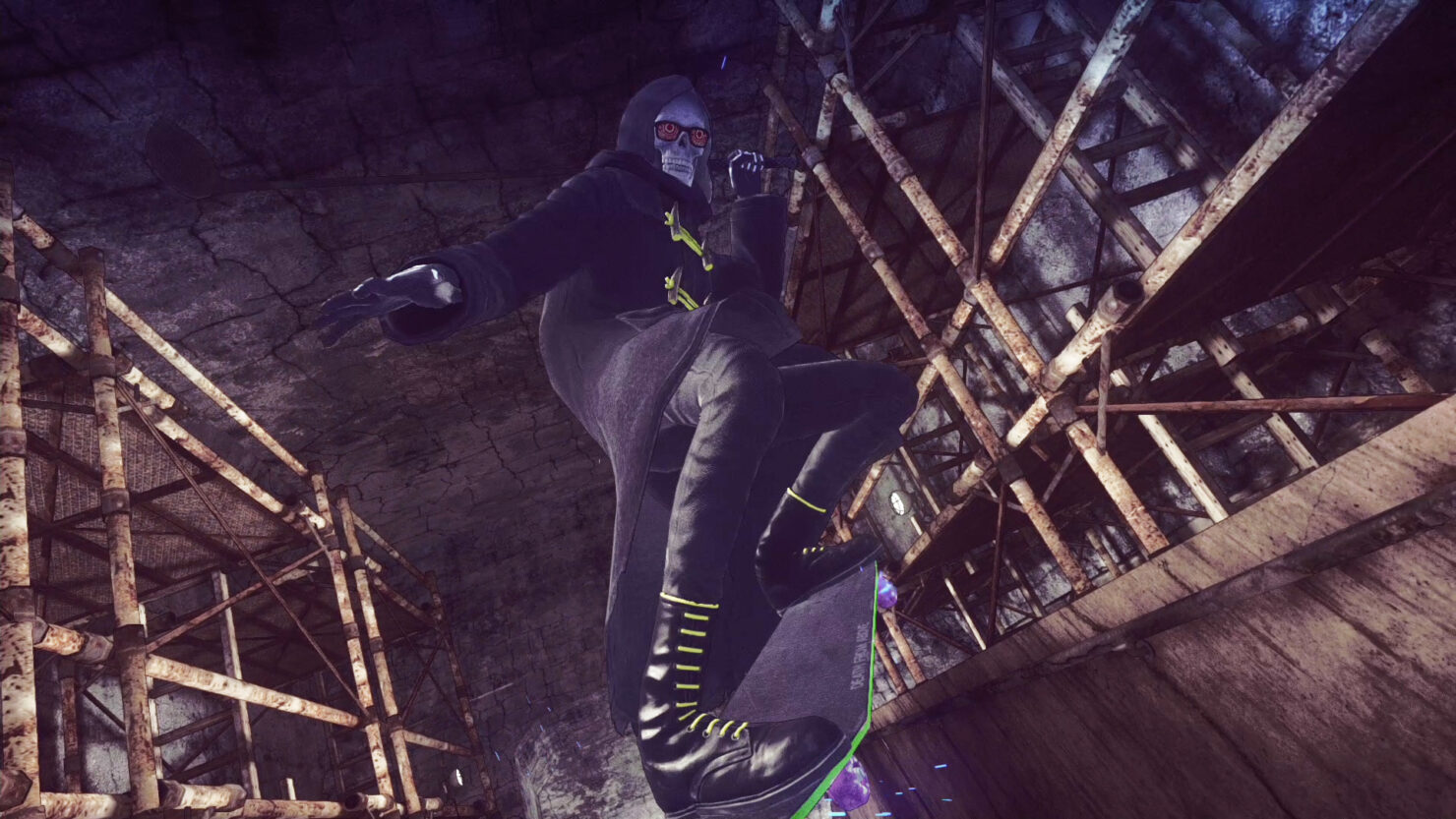 Let It Die is a game we didn’t see coming. When famed developer Suda51 said he was making a free-to-play action game in the vein of Dark Souls or Bloodborne, gamers couldn’t help but take notice. Let It Die is a game that never takes itself too seriously and shares the love of over-the-top graphic violence that you’ve come to appreciate from Goichi Suda. While Let It Die is trying something new for Grasshopper Manufacture, it still shares the charm of Killer 7 or Shadows of the Damned.

Disclaimer: publisher Gungho Online Entertainment flew me out to get a few hours of hands-on time with the Suda51’s hyperviolent free-to-play game.

In the future, after some catastrophic seismic activity, a giant and mysterious tower rises from the ocean. It’s full of untold treasures, the only catch is that everyone who’s tried to best the tower has wound up dead. Good thing that this time around you have a bit of help in the form of your skateboard riding Grim Reaper dressing buddy, Uncle Death.

After arriving at the Tower of Barbs via train, you get a quick tutorial from your Uncle Death. Once you learn the basics you quickly realize that Uncle Death has a bigger role in things to come, aside from getting really excited whenever you make a ‘Gore-static’ kill.

Your journey starts in the waiting room at the bottom of the Tower of Barbs which serves as your base of operations. The waiting room has everything a budding adventurer needs: a shop, a place to upgrade your fighter and a spot to dive into Let It Die’s multiplayer.

If you’ve played any of the Dark Souls game, you’ll feel right at home here. You start off with just your skivvies and your bare fists. Let It Die’s key in combat is managing your stamina. Wildly flail your fists around like a crazy person and you’ll be left exhausted and defenseless.  The trick to winning is memorizing your enemy’s attack pattern to know when to dodge, block, or strike.

The controls take some time getting used to, especially since you can equip a weapon on each hand and the inventory for each item is set to the d-pad, so at first it was common for me to forget to equip an item on my fighter. After about an hour I learned the controls and I was able to get a handle on gore-static kills, which are flashy kills that score you extra rewards. My only real problem comes with the camera that often seems to have a mind of its own; targeting between more opponents made using ranged weapons an issue. I was happy to find out that enemies can hit each other with friendly fire, so when things got bad rolling around sometimes led my attackers into hitting each other.

You won’t stay naked too long, as you kill enemies you can sift through their corpses and find some gear. Everything you equip has durability and once it's broken it’s gone forever. You’ll learn early don’t to grow too attached to anything like the very stylish traffic cone helmet or these completely absurd iron boxing clubs that melts faces. It’s easy if you’re not paying attention to have all your stuff break during a fight. Thankfully, you can craft new gear or purchase them at the shop.

Death is handled differently than what you would expect. Every time you die you’re offered an opportunity to come back to life using special currency. If you decline the insurance, you can take on your murdered corpse and store them in your freezer for further use later.

This plays into Let It Die’s asynchronous multiplayer, as every death results in having your death data recorded and uploaded onto the game’s servers where your fighter could potentially show up in another player's game as a special opponent called Hater. 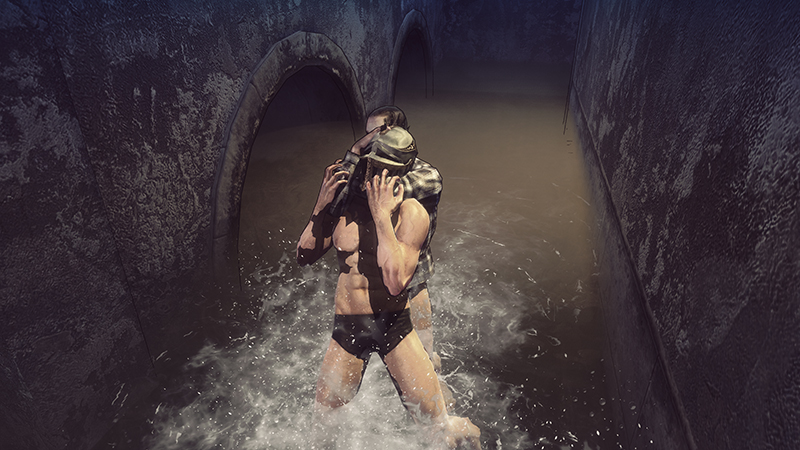 Haters are tougher opponents that could show up anywhere and since they are based off dead players’ data chances are, they are going to put up a fight. If you can take these jerks down you’ll get a chance to score some major loot.

During my session, I managed to ascend a handful of levels in the Tower and fought my first boss. A blind hulking beast made of corpses who can track your movements. At first, he made short work of me. Once I realized that crouching made me completely invisible to him, I was able to put up a fight. Bosses in Let It Die will all have fun little gimmicks you’ll need to figure out.

Once the deaf boss was taken out I was able to tool around with the multiplayer called Tokyo Death Metro, which is an essentially a base raid. You can invade the bases of other players and wreck their stuff and whoever they left guarding the base. Anyone you take down can be carried back to your base to be “convinced’ into working for you. While it was confirmed that you won’t be attacking actually players, your hijinx will notify the owner the base you just raided who in turn can set their sights on you.

Defending your base will be fighters whose bodies you’ve stored in your freezer. Whenever you reclaim your own dead body, you can store it in the freezer. As you level up you unlock newer bodies with different starting stats. 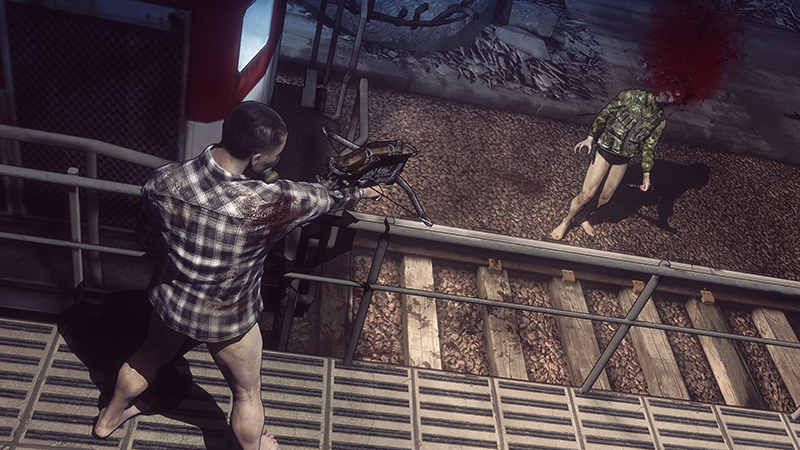 Let It Die is a free-to-play game that will live and die (pun intended) by how it implements its microtransactions. GungHo insists that the game will not be pay-to-win. Players can buy passes that will give them access to a free elevator to the last floor they visited, otherwise it costs them in-game currency. Other things people can pay for are for quality of life improvements like bigger inventory and freezer spaces. You can even pay to cut down on development times for crafting. I think what people will pay for the most will be for lives so you don’t have to start over when you die and just pick up where you left off. In my demo, I had unlimited currency so I couldn’t say how fast you can accumulate the special currency but it does seem like completing quests and defeating Haters will provide it as a reward.

Grasshopper is making a game that oozes with style and revels in its violence in a way that’s so typical of Suda51 it’ll make you both smile and wince in disgust. It doesn't take itself seriously and overall it was a blast a to play, particularly when I mastered the ancient art of beating up Haters.

Let It Die is set to release later this year for exclusively for PlayStation 4. Be sure to check out our fresh interview with Let It Die’s Game Director Hideyuki Shin.