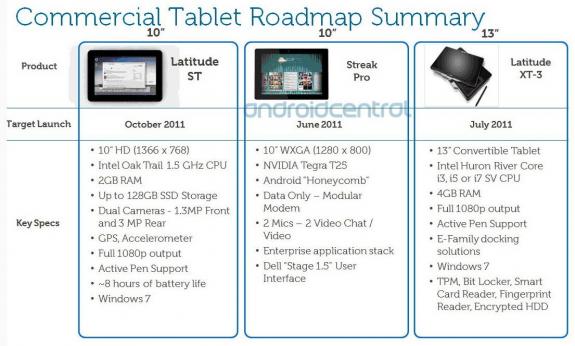 Dell confirmed earlier that it was working on new 10-inch tablets which would be released with in 2011 but didn't provide any solid details or info on them. A roadmap has been leaked by Android Central which details the upcoming Windows and Android Tablets from dell. The tablets include Dell Streak Pro which is an Android Tablet running on Honeycomb 3.0 and 2 Windows tablets.

The Dell Streak Pro is set for launch in June 2011 as listed in the roadmap. The tablet will run in Honeycomb 3.0 (android) and will feature a 10-inch screen with a resolution of 1280  x 800 pixels, an Nvidia Tegra T25 SoC. The Tegra chip is supposedly known to be clocked at 1.2Ghz and would also support 3D. 2 Microphones would be included for Video/Voice chat  and Data only Modular Modem set would also be available. The Dell Streak Pro would be tweaked with the Stage 1.5 UI.

A month Later (July 2011), We will see the Dell Latitude XT-3 which is a convertible tablet featuring a 13 inch screen supporting 1080P HD output. It will include a 2nd Generation Core i series Processors, 4GB ram and would come with Pre-Installed Windows 7.

Lastly, October 2011 would also see the arrival of another Windows based tablet "Dell Latitude ST" which will feature a 10 inch screen supporting a resolution of 1366x768, a 1.5 GHz Atom Z670 CPU, 2GB of RAM, up to a 128GB solid state drive, dual cameras (3MP at the rear, 1.3MP in front), GPS and an accelerometer. The tablet would feature active pen support and will deliver upto 8 hours of battery time.