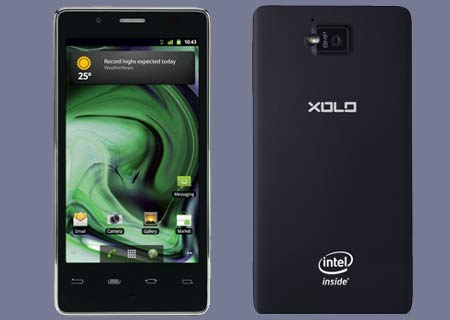 It's ok if you have never heard of Lava or even the Xolo X900 before. The phone in question, which has just been made official, is the first phone of its kind to be powered by an Intel processor. We heard about it in CES but little details were known at that point. Now that it's finally here, lets see what it has to offer. Android 2.3 out of the box, there's no custom skinning here from the looks of the official pictures. A 4.03-inch display with 1024 x 600 resolution (295 PPI), 8MP camera with 1080p video support, 1GB RAM with 16GB internal storage, HSPA+ support with NFC.

The highlight is of course the Intel powered Atom Z2460 SoC which is a single core CPU clocked at 1.6GHz. It supports hyper threading which means you get two virtual cores. GPU tasks are handled by a PowerVR SGX540 GPU which is no slouch either.

On the specs front the phone doesn't seem to offer anything special over modern smartphones. It comes with an outdated version of Android and is made by an unknown company. What is interesting is obviously the CPU powering this phone. It might be a single core but going by Intel's reputation in the desktop arena, I'm inclined to believe there's more here than meets the eye. That will however be decided by the phone's eventual performance and a round of benchmark tests.