After finalizing Windows 10 version 2004, Microsoft has started to work on Windows 10 20H2, slated for the public release in Fall 2020. The Windows maker has also announced today that the Fast ring will now receive the freshest changes and code instead of the Skip Ahead ring. The company said it received "feedback from Insiders in the Fast ring loud and clear that the way we were doing Skip Ahead was a little confusing and frustrating for those who didn’t get a chance to opt-in before the limit was reached."

Insiders in the Fast ring will always receive builds with the freshest code from our engineers regardless of branching off for a specific release. Everyone in the Fast ring is always moving forward!

Today's Windows 10 Insider Preview Build 19536 isn't associated with any specific version of the operating system. However, Brandon LeBlanch, Senior Program Manager of the Windows Insider Program, did say that it's from the active development branch ("RS_PRERELEASE”), which is the branch that tests the new features being designed for future versions.

With all the logistics done, here is what is actually new with Windows 10 19536.

We’re still working on making it easier for you to see all optional updates (including drivers, feature updates, and monthly non-security quality updates) in one place. When optional updates are detected, they will be listed under Settings > Update & Security > Windows Update > View optional updates.

For drivers, you no longer need to browse Device Manager for a specific device to update. Windows Update will automatically keep your drivers up to date, but if you’re having a problem, one of those optional drivers might help. 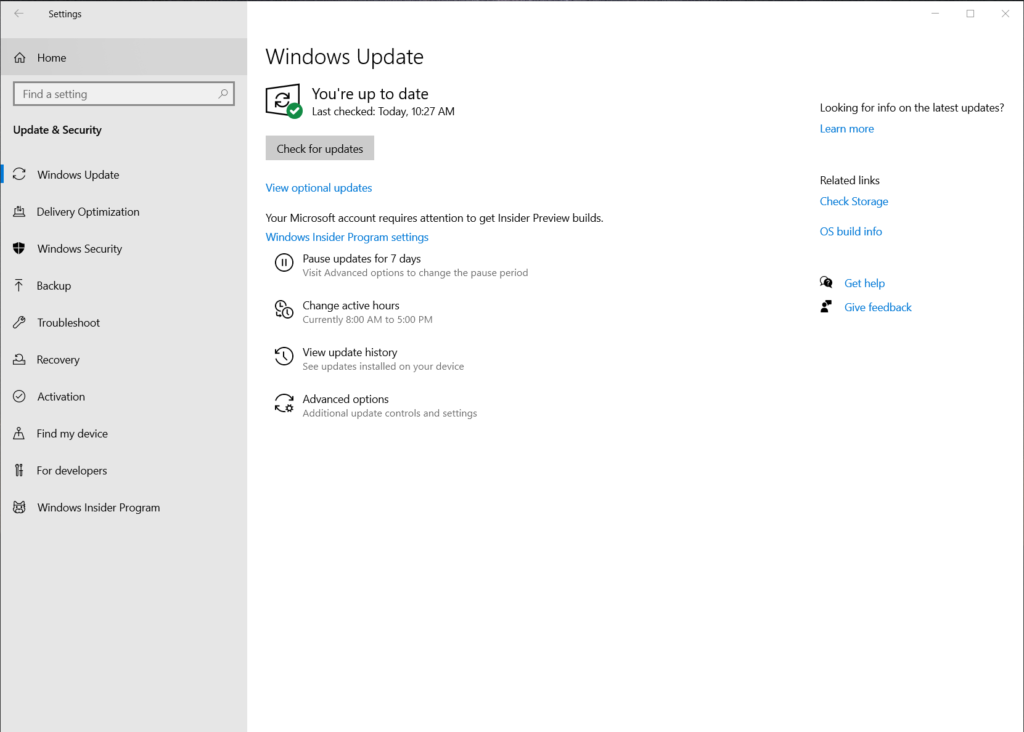 During 19H1 development, we’d started work on an updated version of the Korean IME as part of our ongoing efforts to modernize and improve your typing experience in Windows. Based on feedback, we decided not to ship this with 19H1, and instead worked on further improving the experience first. With Build 19528, we’re re-releasing the updated IME, along with some improvements that help it work better with various apps.

To recap the most noticeable changes included as part of this IME work:

Microsoft has family features that span across multiple platforms, like Windows, Xbox, and Android. On Windows, you can set things up for your family, like screen time limits, content filters, have kids ask before they buy things, or even stay organized with a shared family calendar, OneNote, and Office 365 Home subscription. If you share a device with family, it’s easy to get their account set up in a family group to take advantage of all these features.

In this build, we want to help customers set up their device to be used by multiple people in their family. While we’re not releasing an ISO for this build, some Insiders who choose to reset their PC may see a screen during setup that asks who’ll be using the device. If they select People in my family, we’ll help them get set up in a family group once they get to their desktop, so that they’re ready to get started with all the features. 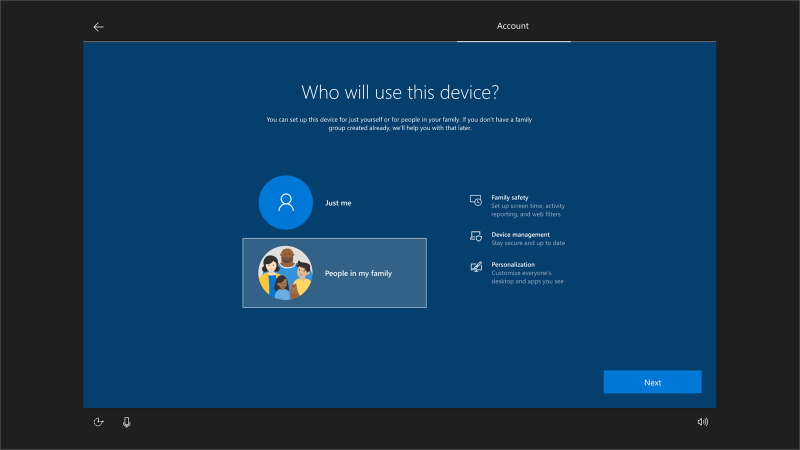 If you see this new page, let us know what you think by going to Security and Privacy > Child accounts and family settings in the Feedback Hub.

Your Phone app – new features rolling to Insiders and production

Photos has evolved. View and interact with your most recent 2000 photos!

We take a lot of photos on our smartphones. We heard our avid Your Phone app users when you when you said you wanted the ability to access more than 25 of your recent photos. Today, we’re happy to announce that we’ve addressed this by letting you view and interact with your most recent 2,000 photos from your Android smartphone’s camera roll on your PC!

With the Your Phone Photos feature, you don’t have to email photos to yourself. Simply take a pic and see it instantly on your PC. When you need to add a recent image to your email, paper, or presentation, just drag and drop. You can also conveniently share it with family or friends or save it directly to your PC by simply right clicking on the image.

Try out this newly enhanced capability and share your experience. 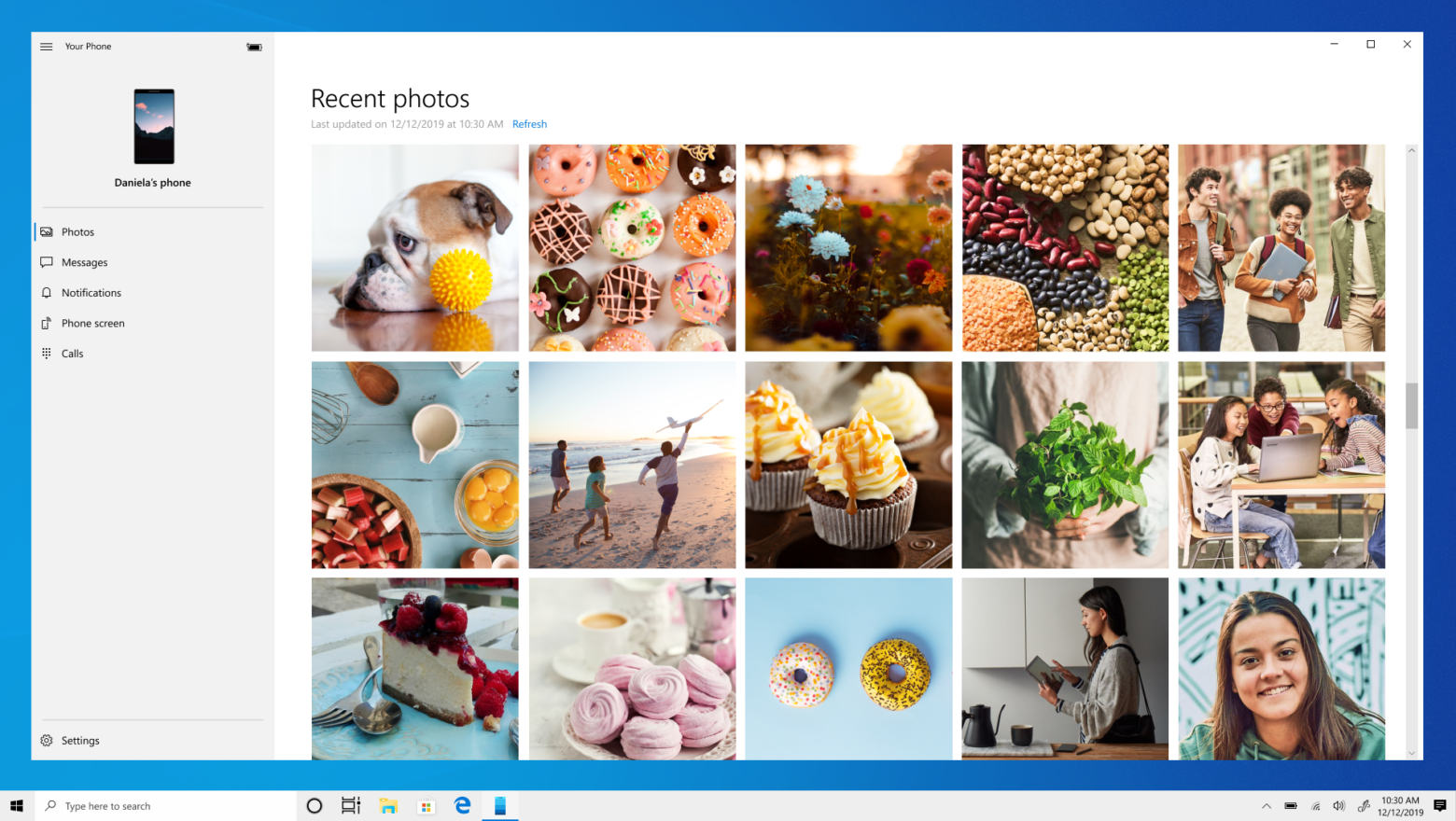 This feature will gradually roll out to Windows Insiders on the Windows 10 May 2019 Update or newer, so it may take a few days to be available inside the Your Phone app. Please make sure you have the latest versions of Your Phone Companion and the Your Phone app to experience this feature.

The Phone screen feature is getting a boost. In addition to keyboard, mouse, and touch support, you can now use your digital pen with a compatible stylus to input on any touch screen enabled Windows 10 PC to interact with your mobile apps while in Phone screen session. Leverage your pen’s pressure sensitivity for drawing and writing like you would with your phone’s stylus with apps that support pressure sensitivity. You will also be able to hover over buttons, and it differentiates between the pen and finger touch. 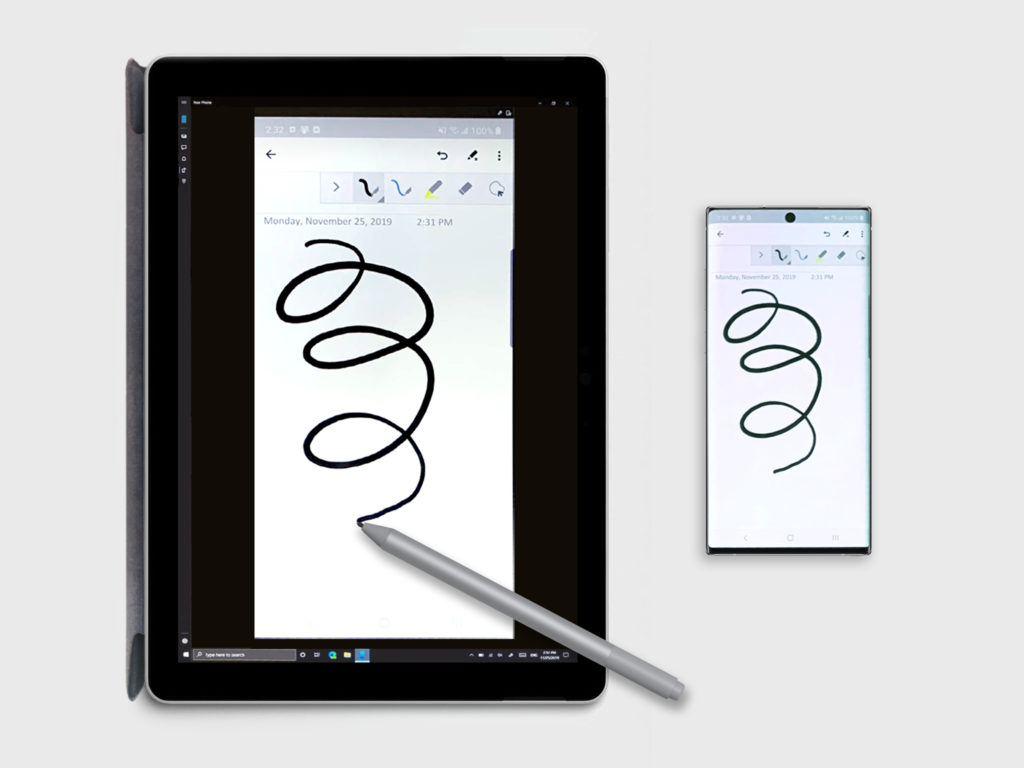 This feature is available to all Windows Insiders on Windows 10 October 2018 Update or newer and requires Phone screen compatible devices.

We value your feedback, so give it a try and let us know what you think. You can report any issues under Your Phone > Settings > Send feedback or directly through Feedback Hub.

Calls—Fifth hero feature now gradually rolling out to all users

Thank you Insiders for your valuable feedback over the last few months to help improve the quality, performance, and user experience of the Calls feature, which originally rolled out in October. We are thrilled to announce that this feature is now ready and gradually rolling out to everyone.

You don’t have to split your attention between your phone and PC to answer those phone calls. With the Your Phone Calls feature, tap into your PC’s speakers, microphone, and larger screen for a richer calling experience. Effortlessly transfer calls between your devices for privacy or when you are on the go.

You can reference the Your Phone support page for additional information.

As a reminder, the Your Phone app has evolved over the past few months and now provides you with instant access to your recent photos, apps, texts, notifications, calls, and more on your PC. You don’t have to split your attention between your devices or break away from your PC workflows. Give this app a try and let us know what you think!