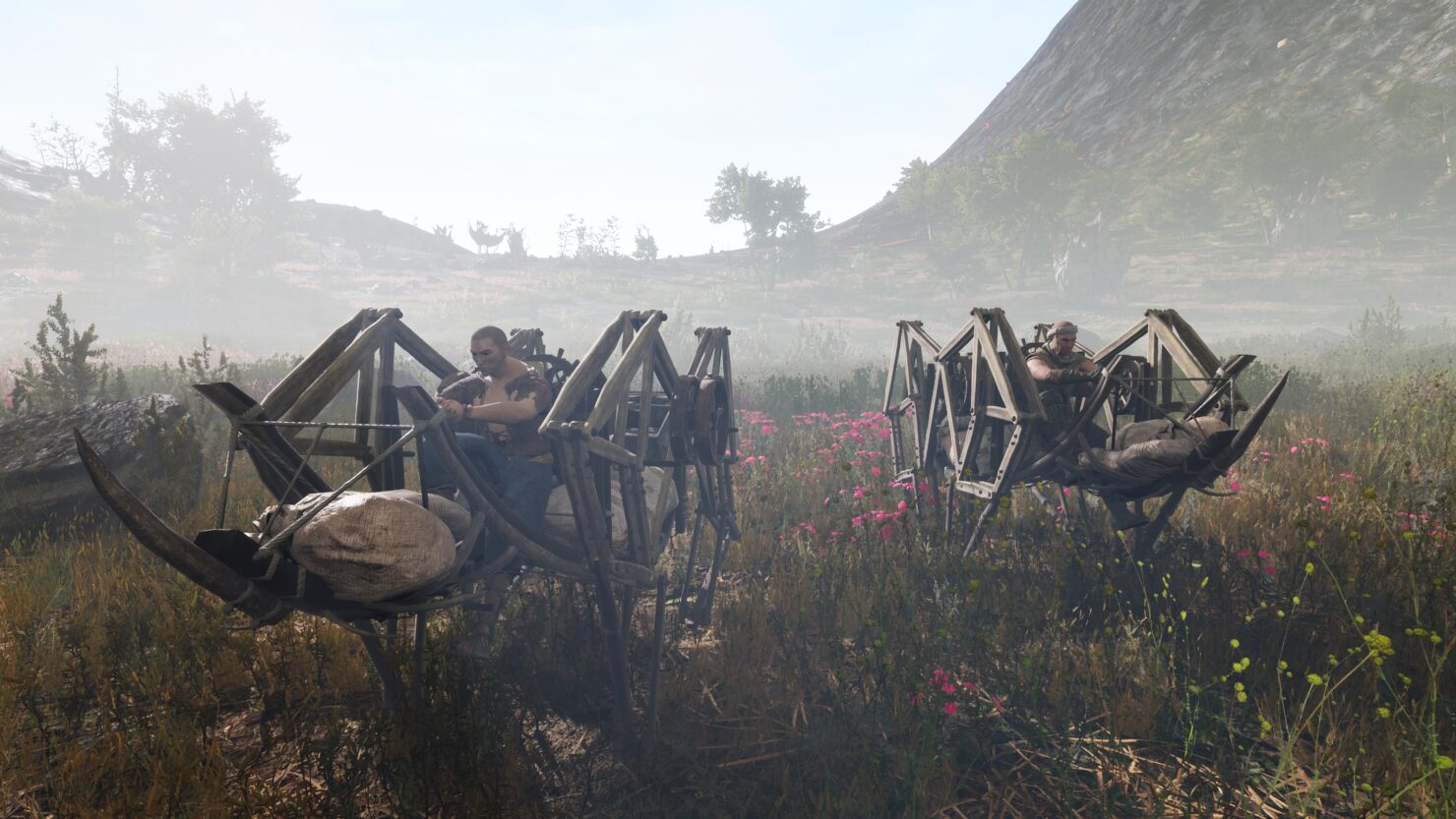 Last Oasis, the nomadic survival MMO in development at Polish studio Donkey Crew (Of Kings and Men), has received a slight delay to its previous Steam Early Access release date. September 3rd had been set as the launch day, but the developers said today they need more time to optimize and further polish the title.

The new date is now October 10th. In addition to that, the team revealed the Legendary Sandworm enemy in a new trailer.

Check back soon for Dave's gamescom report on the game, which has an ambitious design and premise: the Earth's rotation has stopped and human survivors have become nomads in order to stay in the ever-moving small livable portion of the planet.

Traverse the world on wooden wind-powered, walking machines inspired by Theo Jansen's amazing strandbeests. Walkers can be adapted for travel, transportation, harvesting, combat, or used as mobile bases. A multitude of structures, attachments and upgrades allow players to personalize Walkers to their needs.

The Sun burns the land in the west, turning it to dust. In order to stay ahead of the obliterating Sun, nomads must explore new territories that slowly emerge on the eastern horizon, from the side of the Earth that has long been frozen in impenetrable ice.

After a cataclysmic event halted the Earth’s rotation, the planet was split into two extreme and deadly environments. Only a narrow band of space between the hot and cold halves of the planet has conditions that can support life. This band moves at the pace of the planet’s rotation around the Sun, and all life on Earth must migrate with it to survive. In order to keep moving, the remnants of humanity have built nomadic machines, and a walking city called Flotilla.

Every day, Flotilla transports more nomads into the passing oases, where warring clans fight tooth and nail for control of territory and valuable resources. Some nomads have carved out lucrative positions for themselves and even gained status with Flotilla; however most nomads are locked in a daily struggle for survival, forced to battle both nature and those around them. There will never be rest for the men who built the walkers; they can only move forward.

Find ways to survive. Gather resources. Craft equipment. Build your Walker. Improve your skills. Learn to exploit what remains of the world. Keep your Nomad alive for as long as you can, as you become stronger the longer you escape death.

Trade in a Player Driven Economy

Trade networks stretch between the known oases. The global player-driven economy is based on real supply and demand. Smart and quick traders can make huge profits, but running trade routes always comes with a risk. Other nomads may opt to produce or hunt down rare and highly localized resources. It’s always wise to consider potential competitors first though. Challenge another clan’s monopoly, and you may become their next target.

Travel and Explore an MMO-sized World

The world consists of many interconnected oases, forming a large open world. Potentially a thousand oases exist simultaneously - the number automatically adjusts to accommodate the size of the playerbase. Each Oasis is over 100 km2. Explore them to reveal new and unique biomes while plundering their limited resources. Some nomads may pitstop to refill their water. Others will settle for some time, but ultimately everyone will pick up and voyage east to escape the encroaching Sun.

No-Man’s Land is the open desert that sits between the last livable oases on Earth. Use it to quickly travel between adjacent oases, provided you bring enough water on your Walker. You can safely log off here – the endless dunes allow you to hide your walker and mobile base if you want to go to sleep or just catch a breath.

Dynamic skill-based directional melee combat. Pick your weapon from a range of one-handed or two-handed swords, maces, axes or quarterstaves. If you prefer to hammer your opponents from a distance, you can choose to fight with a wide range of onboard weapons like ballistas, scattershot guns, repeaters, or catapults. Specialize in one or become a more versatile fighter by trying to master them all.

Construct portable bases or more permanent fortifications. Protect yourself from hostile players and natural dangers of the world. Stone walls offer superior defense, while lighter wooden structures are able to be packed on large Walkers and relocated.

Individuals and small groups of players are the backbone of Last Oasis. Trading, hunting and harvesting allows anyone to acquire better equipment or sell goods for profit. For those who prefer a more high-risk, high-reward lifestyle, piracy is always an option, but beware of payback.

Become a political and economic power. Control a region and get rewarded with a supply of local resources gathered there by roaming Nomads. Grow your clan and make alliances to maximize and protect your income. Always be ready for conflict – hostile clans will challenge your control and come to take away everything you’ve built.

Master the vertical movement. Every Nomad owns a grappling hook – the most essential and iconic tool of those who drive walkers. Adapt it to your playstyle. It’s all about your skill: some struggle to climb the smallest rocks, while others swing through forests outspeeding even the fastest Walkers. Can you defy gravity?