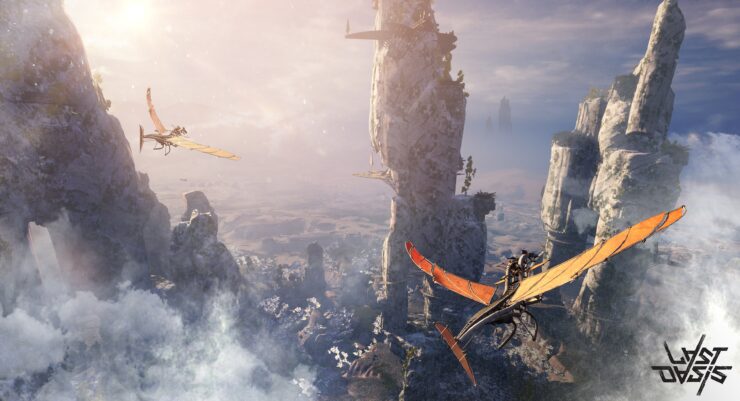 Survival MMO Last Oasis has just surprise-launched on Xbox consoles, about a year after the game's debut on PC via Steam Early Access.

During a press event that took place earlier this week, we were briefed on the launch and also got to interview Donkey Crew's Creative Director & Project Lead Florian "chadz" Hofreither and Producer Lucas Stannis as part of a roundtable Q&A. First of all, though, here's what you need to know about the Xbox launch, which coincides with the debut of Season 3 in Last Oasis.

Does Last Oasis already feature Xbox Series enhancements and if so, what is the target frame rate on next-gen?

This is an Xbox One game. We are definitely working on seeing if we actually can have an Xbox series S|X version of the game later, but right now, Last Oasis is going to be playable on Xbox Series via retro compatibility as this version is made for Xbox One/S/X. We used Xbox One dev kits and all of that. What we can say is about the target framerate for this version, the last-gen version, which is 30 FPS. Right now we have some parts of the game that are steady at 45 FPS, some of them are at 30, others struggle and get down to like 28 or something. That's something that we are working on during the Game Preview of the game, making everything more performant on the Xbox. And also like making the play feel good both for PC and Xbox. But of course, we're going to assess how we're actually going to do our next-gen version for the Xbox series S. So, we cannot officially say target FPS for the next-gen versions, because that's just not the version that we're working on right now.

Can you talk about the roadmap for Last Oasis?

Right now, most of our focus has been to just add all this content and make the Xbox version. That took a lot of focus and effort. Regarding the future, I will say that we are very largely focused on community-driven development. We do have ideas, more than enough ideas, as to what we want to develop. But right now, we want to see if those changes that we did work out in the way that we expected. So in particular, what we're most excited about, apart from the content, and the experts, obviously, is this shift to the new smaller Realms. I cannot state strongly enough how much I think this will impact gameplay, because previously, you were one person in a group of 10,000. Now you might be one person in a group of 100 and this means that you will have much more impact.

[WCCFTECH] Are you planning to support Unreal Engine 4's built-in ray tracing and/or NVIDIA DLSS at some point?

Both NVIDIA DLSS and ray tracing, everything of this new kind of stuff, we're definitely working on it. We don't have it right now but we're going to be assessing if we get to introduce it for the next-gen version. Of course, the PC is always going to be like the biggest version. For now, though, we don't have it and we don't have a clear plan on when to add it. But definitely, if we're going on the road for next-gen consoles, we're definitely looking into those features.

That's actually a very interesting question because yes, there is support for mouse and keyboard input on Xbox. Both versions of Last Oasis are the same, right? They both have support for the GamePad and the mouse and keyboard, so both of the versions support that, but we are not claiming that we 100% support mouse and keyboard on Xbox yet just because we still have some little glitches right now with hot swapping between game inputs. We're still fixing that and as soon as possible, we're going to send a new patch for the game that is going to have 100% official support, but the game already works with keyboard and mouse, you're going to be able to use that on the release date. But it's not officially supported yet, because it still has some problems.

Will there be private servers on Xbox?

First of all, on PC, we have private servers and we're going to have them for Xbox as well. Not exactly at launch, but assume like a week after launch, we just need to figure some technicalities out, it won't take long. But the other thing that we want to focus on is actual self-hosted private servers, which is another big thing that we want to work on this year. That's the ability for people to host their own server and to have complete access to where they want to host it, etc. That is something we want to introduce something that the community asked for a lot. And we will, private servers will be a huge focus this year.

Also with the private servers, at this moment, for you to own a private server right now, you actually need to use your Steam account. So any Xbox player that wants to host the server would be able to but not with the Xbox Live ID at the moment. We are working on introducing it. But you're definitely going to see people hosting private servers with their own Steam ID that are going to be crossplay and Xbox only. But the good part is that Xbox players can join any server, they can join Xbox-only servers and also crossplay servers both on official and on private servers.

Will the next-gen version of Last Oasis be a free upgrade when it lands?

Honestly, right now, we don't know. This is the first time we ever made a game for consoles in a way and it took a lot of our effort and a lot of time. It was a lot to learn as well. We do not know yet exactly when we will bring the game fully out of early access. And to be perfectly honest, we're not in a rush. As long as we have ideas and as long as we see there's something to be improved, we're going to do that. We are basically not in a rush to bring it out in a full version, so right now, I wouldn't say that our plan is to be done in 2022. As I said, we just need to make the game good. And then when the game is perfect and we see from the feedback that it is, then we'll look at wrapping it up and calling it a full release.

Does the Xbox One X version run and look better?

Of course, we have a different target for the base Xbox One, the Xbox S, and the Xbox One X. There is a little bit of a difference in graphics settings. But there is nothing super special about the Xbox One X version, it's only the base version with a few tweaks. Actually, we are going to be supporting English only for this release. We are definitely wanting to bring more languages localized like in the PC version. But we do want to pile more content before we do that. It's very important for us that we don't keep having the trouble to redo a lot of localization.

I think we released Last Oasis on Steam Early Access last year with multiple languages and found that to be extremely difficult for an early access game. It has proven to be very complicated, obviously because we keep developing new things, we keep changing things, and every time we need to translate it to a bunch of different languages, so we decided that for the Xbox version, we'll just keep English to keep that maintenance at a rather low level say and once we are done with that, then we'll add the localizations. It's just going to fly better with the development.

Are you worried about how Xbox players of Last Oasis will fare against PC players?

I can say that the competitiveness is there, we did a lot of testing with both Xbox players versus PC players, where we didn't see a gigantic leap. But of course, when you're trying like a $10,000 computer versus an Xbox, there is going to be a little bit of an advantage on the performance side on the former. We are going to see how the crossplay works on live servers, but the good thing we have is that there are Xbox only servers around so if we see that the playing field is not level, on the crossplay servers, we have the Xbox players being able to fall back to Xbox only servers, while we actually kind of check it out.

Personally, actually playing on an Xbox One server on Season Three, I just want to see what it's like. I think that the experience on the Xbox Realms is going to be very interesting because you get to experience the game fresh and you get to learn it together with other people who are not familiar with the game yet. And for me personally, that's the most exciting part about a small game of learning how everything works. So that is what I'm looking forward to.

[WCCFTECH] You've mentioned a greater focus on PvE. Does that mean you might add more traditional dungeon-like content to Last Oasis at some point?

That's absolutely something we are really interested in. We've already worked on multiple prototypes, it's just that those prototypes take a long time to find out. So whenever we push more work towards those PvE dungeon-like experiences, we find more things to work on that are more pressing. When you say dungeon-like, though, I wouldn't take it literally. I mean, it's not literally going to be a dungeon or cave or something. But those experiences are something we want to do. We just need some find some time. So it's basically a passion thing for many developers. We just haven't found the time yet.

You can see this on Kali Spires. Previously, we would have these open Rupu camps there where it's not that difficult to raid them because you can just go in and out very fast. Of course, the enemies there are ruthless, but it's a little bit safer than in Kali Spires where it's not that easy to just fall back and flee. So we're gonna be adding more stuff like that, that is less like 'Just go there and harvest stuff from these guys' and more actually finish an almost quest-like part of the game.