The newly founded studio from Hideo Kojima, Kojima Productions, has quite a lot of job opportunities, and those listings, possibly reveal some juicy additional info regarding Kojima's upcoming title(s).

At the moment of writing, Kojima Productions has more than 20 job vacancies in various departments. While both Sony and Kojima haven't revealed anything about Kojima´s upcoming PS4 console exclusive, some of the jobs listed, possibly reveal quite valuable information. 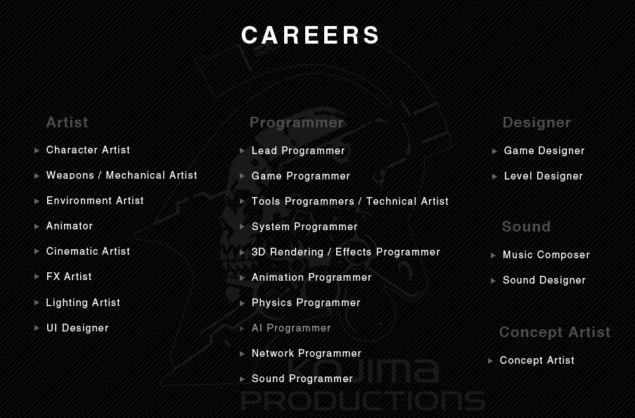 Although all job vacancies are written in Japanese, we managed to roughly translate some parts of the listings.

To start off, there is a vacancy for a Weapon & Mechanical Artist. Roughly translated, Kojima Productions is looking for an artist to do 3D model production, such as mechanical, weapons, vehicles and gadgets.

Experience not required, but desirable
Rich knowledge in mecha and military field

Interesting to note is that the listing mentions, "rich knowledge of the mecha and military field. Although this experience isn't required, it's desirable according the listing.

Next up is the animator vacancy to produce in-game animation, and cut-scenes for the game. The vacancy mentions production knowledge of a wide range of animation, possibly including vehicles and mechanical, but also monsters.

Experience not required, but desirable
Rides and mechanical, monsters such as, production knowledge of a wide range of animation that is not limited to the person, and experience

Kojima Productions is also looking for a Network programmer to implement a network mode in the game.

Business content
We do network mode program design and implementation of in the game.

Another vacancy that catches attention, is the listing for Game Programmer. While the vacancy itself isn't the special, the listing does mention that 3D development on console and pc is desired. Furthermore the listing notes a CROWD AI system, and an event control system in RPG.

Last but certainly not least, is a vacancy for a level designer on Kojima's game. According to the listing, experience in Unity and/or Unreal Engine is desired, but not required.

So what can we make from all of this additional info? Judging from the vacancies, we're looking at some sort of a SCI-FI title set in a military setting and will include RPG elements, and a crowd AI system. The game possibly involves some kind of mecha and vehicles, but also monsters are a possibility. It is safe to say that the title will feature some sort of an online/multiplayer mode as well.

Take the above with a grain of salt though, as its purely based on info gathered from the job listings. We'll keep you updated when we learn more about Kojima's upcoming title.

Death Stranding PC Doesn’t Support Ray Tracing Due to Time Constraints; PlayStation 5 Version Will Be Looked Into in the Future