Star Wars Knights of the Old Republic Dau (Welsh for two) is 11 years old now and still continues to be one of the best RPG's ever created. Now it's being updated with full and complete Steam integration. 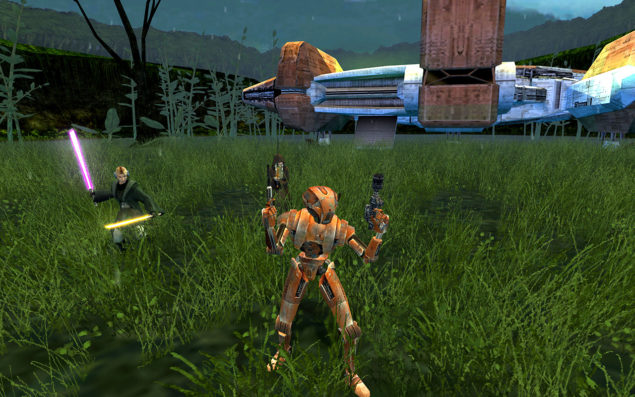 Statement: Don't you dare restart me to update, meatbag.

Star Wars Knights of the Old Republic II has been updated and released for Mac (First time on Steam), Linux and SteamOS.

Having been released for the above platforms this means that there are a number of changes that are applicable to all platforms. The best of course is the ability to use much higher resolutions, up to a whopping 5K. It achieves this magical feat through the use of up-sampling and a healthy dose of anti-aliasing.

The modding community has also been opened up with support for the Steam Workshop. One of the first mods available is also going a fantastic representation of the type of ingenuity that's still enthusiastic about supporting even this 11 year-old game, The Sith Lords Restored Content Mod

Knights of the Old Republic II still has quite the following, even being compared to the Empire Strikes Back in how it captured all the great things in video gaming and RPG's specifically. The darker plot and well-written dialogue still offer a fantastic experience. It might not have the eye-popping visuals of GTA V, but if you enjoy appealing characters and an engrossing story will absolutely and thoroughly enjoy Knights of the Old Republic II.