Kingston Introduces the DC1000M is a data center SSD, and this SSD utilizes 3D TLC NAND flash memory chips. These NAND flash chips allow this SSD series to feature a read and read speed of up to 3,100 MB/s and a write speed of up to 2,800 MB/s. The speed in combination with the impressive size of up to 7.68 TB means allows this drive to be fantastic for its intended data center usage.

Kingston reveals the DC1000M data center SSDs that features a maximum capacity of up to 7.68 TB 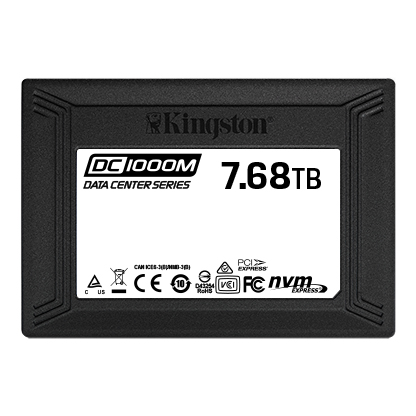 Another feature that makes this SSD perfect for data center use is a fast read and write speeds while still offering incredibly large storage capacity. These features are highly sought after by data centers as being able to split up these quicker drives between different virtual machines or servers makes this expensive SSD much more affordable.

This SSD series can operate in both the cold weather of just 0°C (or 32°F), while for the hottest temperature that these drives can operate at is 70°C which is roughly 158°F. This is another feature that data centers will enjoy as inside a server case, which has multiple servers all running at the same time, and the temperature can get exceedingly high when compared to other PC environments.