Humor: Microsoft Clippy Throws A Rage Fit At Jimmy Fallon Over His MacBook

Windows 10 is well and truly here, with millions of users around the globe getting a taste of Redmond's latest and greatest desktop OS for the first time. But as the rollout is taking place, Microsoft's Clippy paid a visit to Jimmy Fallon on The Tonight Show, and things go south as it notices the host's MacBook lying on his desk. 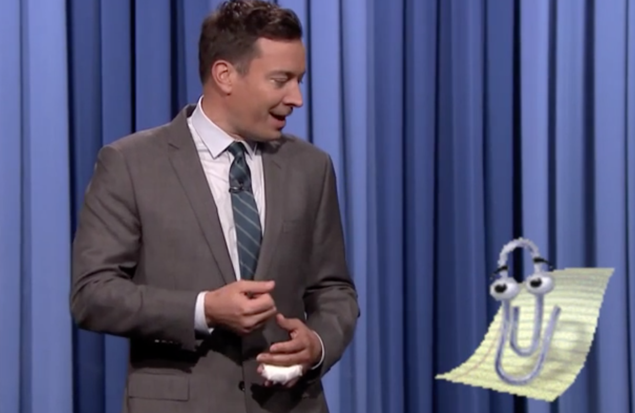 On The Tonight Show, host Jimmy Fallon mentions the rollout and release of Windows 10, and is soon interrupted by the entrance of Clippy, Microsoft's assistant from the olden days of Office. Things go smoothly for a while and Clippy is even given a warm welcome by the audience on the show, but as soon as Clippy notices Fallon's MacBook on his desk, Microsoft's assistant completely loses it and throws a tantrum, drawing out a baseball bat, urging Jimmy to update to Windows 10 and even go for Microsoft Office. The whole scenario is downright hilarious, and we recommend that you give it a watch yourself.

Windows 10 is a bold new release by Microsoft and does away with the usual layout of the OS which we have come to expect over the years. Microsoft is so confident about its new release that it expects it to be on a billion devices within two to three years, but judging by how the initial response has been so far, it's hard to tell if Microsoft can even hit its dreamed up goal in even five years' time. But still, the company is making a bold claim regarding its new offering and has high hopes from it as it drives its wheels into the future.

If you haven't updated to Windows 10 already, then fret not, as we are here to help you get in on the action in a matter of minutes. First of all, make sure you have made the necessary preparations to make the jump to the new OS, and even meet the minimum system requirements to run Windows 10. Once you're all set, you can install it on your desktop or notebook PC in a flash.

Installed Windows 10 already on your PC? Be sure to drop your thoughts on it with us in the comments section below. Furthermore, also let us know what you think about the new Jimmy Fallon video featuring Microsoft Clippy, we love to hear from our readers!