Could Jerky Be One of the Most Scrumptious Source of Protein Ever? Is it Really That Unhealthy?

Jerky, quite possibility one of the most delicious foods on this planet. Certainly up there with bacon in its tastiness, nutrition and mouth pleasure factors. And because of it's supposed nutrition, it could also provide gamers with a fantastic way to refuel quickly and inexpensively. 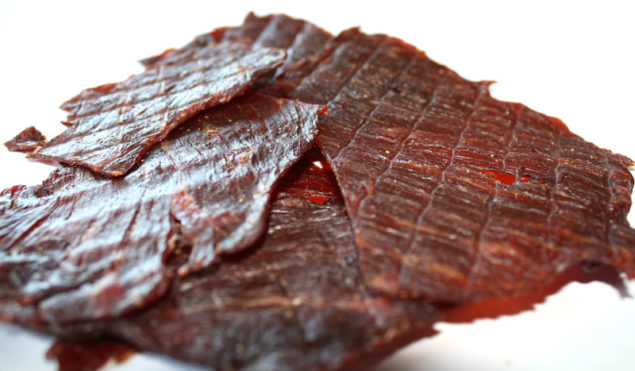 Dried meat, and Jerky specifically, could be one of the best protein sources and gamer fuels ever. With caveats of course.

There are plenty of food products that are friendly for gamers, most notably coffee. But what about the solid food variety that we all need in order to survive? What if we binge on gaming in such a way that we need a quick source of nutrition that's not just a liquid? Something more (perhaps) digestion friendly?

Of course let's remember that all things in excess can be bad for you. Some would even consider the jerky a wholly unhealthy delicacy that should thusly be avoided at all costs. But is this actually and universally true? Perhaps, if reality is indeed governed by rules that are optional, but in actuality if you can find a brand that reduces it to the most basic and natural of ingredients and methods used to create it, then it can be quite the delicious and nutritious snack. Of course, you can always make your own and ensure the most pure of ingredients yourself.

A little history about this most precious of resources. Jerky itself find its origins in South America where the Incan Empire were using the natural climate to essentially freeze dry meat to increase how long it would remain preserved. It was a novel technique that quickly spread once the Spanish discovered it. In fact the word is derived from a Quechua word, ch'arki, which literally means "dried, salted meat". It's also a method seen in other cultures as well, the Chinese have a slightly sweet variety known as bakkwa, Southern Africa enjoys what is known as bit long and the Nepalese people have enjoyed sukuti for some time.

The Mandalorians even have a dried delicacy known as gihaal, which is a dried fish meal product great for a battlefield snack. Is a staple of the world due to it's high availability of protein and other nutrition and it's incredibly long shelf life. Hell, I think most people like it because of how it delicately makes your taste buds weep for more.

How is it made? Quite simply its dried. The more complicated answer is that thin slices of meat are trimmed of any fat, flavored and then dried, usually with some sort of substance helping with the drying processes. The far is trimmed not only to remove unhealthy saturated fats, but also for a more practical purpose as fat won't dry and risks becoming rancid with time. The obvious trend is to use chemical preservatives to enhance the drying processes, though that isn't always, and certainly doesn't have to be, the case. Good companies will dry their meat with more traditional means such as the application of salt in addition to a smoking process to dry it.

Dried and preserved meat was a veritable staple of the pioneers of the US while they explored the unknown territories of yore. It was prized for the ability to provide a high level of protein, a good portion of mostly good fats and precious sodium in a very long lasting form factor. It's also a favored positive of fighting men and women worldwide for those great properties. Is quite magical really, and I believe everyone should enjoy a little jerky every once in awhile. It's healthy and readily freaking yummy. There is one caveat, however. If you've between explicitly told by your doctor to avoid sodium because of a condition of some kind, then just be cautious about your consumption.

So yes, there is obviously salt in jerky, which means the sodium level is going to be high. But that's a natural side effect of the process of drying and preparing it, even if you make it yourself. But if you do but it from a good company that uses good ingredients and a more traditional drying processes, then you really have nothing to worry about!

Companies that create quality products with reduced unnatural ingredients do exist. Those that seem to pride themselves on providing a pure jerky experience to the gaming masses. They use better ingredients to allow you access to a truly wonderful product. One such that I found was JerkyXP. So I promptly ordered some of my own to see if it was as good as they say. I didn’t receive my product for free and was not compelled to, or asked to write this in any way.

My order arrived a day after it was placed. One day. That's amazing! The dried meat product was even better than I had imagined. Simply amazing! I had the chance to try their HoneyBBQ and Teriyaki varieties. The ingredient list is simple and the sodium is on the low side for such a fine product. These two flavors are on the more mild side of the spectrum but are infused with very complex yet distinct flavors that really awaken the senses. It's a taste that really needs to be experienced first hand, no length of words or carefully crafted piece can accurately describe how satisfying these two flavors really are. It sings on the tongue, dances in your senses and they're just plain super delicious.

There are, however, two things that might stand out to the astute reader. Sodium nitrite and monosodium glutamate. These two ingredients have been commonly associated with health issues and other ailments that people have reported after eating it.  Research has shown the the issue with sodium nitrite is really the way that it interacts with amines, a naturally occurring nitrogen based organic compound, to create nitrosamines. Nitrosamines are indeed toxic and are can be created during the curing process or in the digestive system. Studies show that vitamins C and E can help to prevent such from occurring, so adding those two antioxidants to food with nitrites can negate the apparent toxicity. Is incredibly important to note that nitrites are naturally occurring in the bloodstream and are a result of metabolizing nitric oxide, which is a very important neurotransmitter. Nitric oxide is vital to our lives, and metabolizing it will cause nitrites to occur in our bloodstream which can, but may not, react with those amines to make the toxic substance we all worry about. Sodium nitrite, them, is not necessarily toxic or bad and hasn't been definitively associated with any negative consequences or health problems. It's only a weak correlation. Correlation doesn't determine causation.

Monosodium glutamate, the infamous MSG that also seems to be blamed for health problems around the world. Again, though, there is no actual definitive proof that it's the actual cause of any of the issues it's blamed for. Is only a weak correlation. Remember that anecdotal evidence isn't necessarily evidence. A whole host of issues could be responsible for what's going on. It is known to to trigger migraines for those that already suffer from those horrible harrowing head conditions. It turns out that glutamates are also important neurotransmitters, so perhaps there is another mechanism. But in general there isn't even a casual relationship between many of the symptoms and MSG. If you don't suffer from migraines, then it's likely fine for you. Don't jump on the bandwagon, do your own research and experiment on your own, as we're all different and react differently.

So, sodium nitrites and MSG are not necessarily bad, and JerkyXP is good. Really really really really good. You seriously need to try it if you haven't had the chance already. It's worth every penny. I nearly inhaled every piece of mine in no time. Perhaps next time I'll actually seek to enjoy each piece.

And again, I was not paid to write this, nor was I given jerky in any way shape or form. It was just exceptionally good.