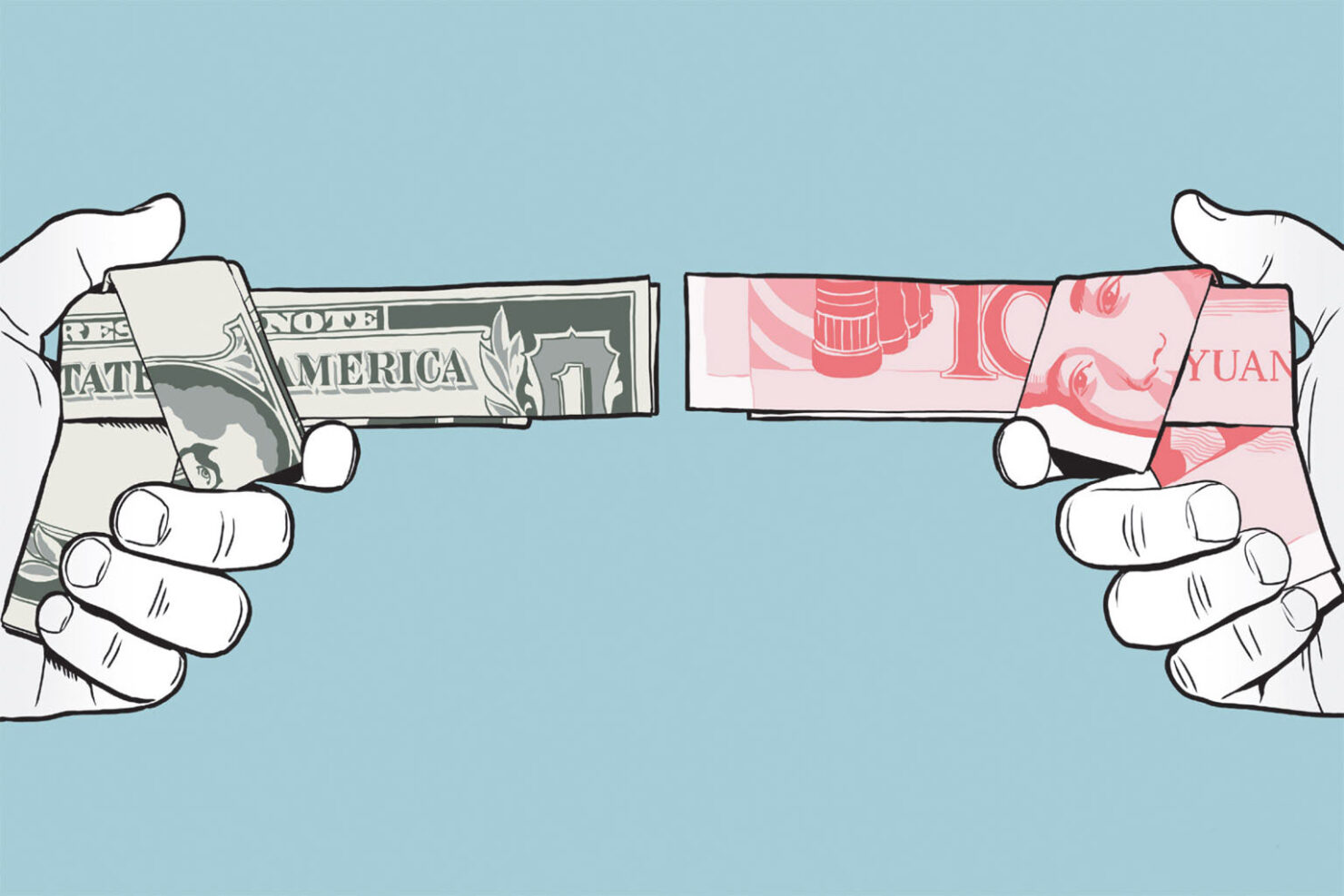 Global trade tensions have ratcheted up a few notches this week (again) and we also saw the first warnings from major companies that things may start to hit their bottom line with Mercedes-Benz owner Daimler warnings that it expects profits to take a slight hit this year on the back of tit for tat tariff moves. Since then, German automakers stock has fallen with Daimler worst hit at over 5%. The latest moves by the Trump administration continue to take aim at the global system of trade which the West has championed for decades. Technology is probably the sector which would be most affected by this change so we’re taking a look today at some of the theory and fact behind these changes.

Tariffs on their own are significant, but really not tantamount to a trade war. They’re merely the first opening shot across the bow. However initial tariffs can obviously descend beyond that and in many respects it’s a great achievement that the global economy has managed to in general reduce restrictions on trade continuously for decades. That’s not to say that everything is perfect and many remaining barriers to trade are viewed as unfair, particularly by one man with the ability to do something about it: President Trump.

Despite campaign promises to brand China a currency manipulator never materialising, the size of the trade imbalance between China and the US clearly irks the President with initial warm words giving way to protectionism and criticism. Certainly there are a lot of problems with Chinese economic policy with the vice like grip the government holds on its currency one of the foremost (the debt black hole is of course another), but upon closer inspection much of the bluster seems to be a hand being overplayed.

The reported imbalance is actually a massive accounting oversimplification taking into account only the final production country of many devices rather than the entire value chain of production. The classic example in this case is that of the iPhone. Most of the value chain of an iPhone is captured outside of China with Apple in the US, Samsung in Korea, Toshiba in Japan and SK Hynix also in Korea all taking sizeable chunks of the value chain. China is the final assembler of components but from a trade balance accounting standpoint, almost the entire value of the iPhone hits the China – US trade balance as an export from China to the US. This kind of overstatement of value happens time and again across the electronics and technology industries which are a major contributor to the problem. Estimates put the actual trade imbalance between 30 – 40% lower than the headline number at somewhere around $240 billion.

For a long time the theories of global trade and economics have lent themselves to developing ever more advanced economies which focus on services rather than heavy industry and manufacturing. Services command higher fees and margins in general allowing for greater profits and a higher standard of living as well as allowing poorer countries to provide the cheap manual labour that both provides richer economies with cheaper products as well as allowing poorer countries to work themselves out of poverty and to eventually make the transition to service based economies with greater profits.

The trouble is that the theory often looks at ideal scenarios and the real world often doesn’t work like that. Having a service driven economy is great, but there are generally always going to be people that for one reason or another don’t end up in the service sector. Somehow, these people need to be able to have jobs that provide for them too and this is what the US may be trying to address, all under the banner of “national security”. The latest example of which is being auto parts with Trump now threatening EU manufacturers with greater tariffs to export cars to the US.

It’s an interesting scenario. Germany has led what has been described as “the German export miracle” from a manufacturing and industry approach. German cars are renowned and the country has led economic growth from an engineering and manufacturing approach. It should come as no surprise that Germany is also on a US treasury watch list for potential currency manipulation which is a bit harder to pin down since it is part of the Euro, however it has clearly benefitted from such given the weaker countries in the Euro which have served to drag down the relative value of the currency against many other major global currencies.

Fundamentally, the argument is that if Germany still had the Deutsche Mark, its economic performance would be reflected much more in its own currency than it would be in a currency shared with significantly weaker European economies like Spain, Greece, Portugal, Italy and others meaning that its value would be stronger and its exports more expensive. It is unlikely many people would consider buying a Volkswagen vs a Ford or GM car in the US if a similar class of car was significantly more expensive than a domestic equivalent.

The objective it would seem is that Trump wants to move the means of production increasingly to home shores. This would in general lead to higher prices for consumers due to the higher costs of labour in advanced economies like the US but the longer term objective is obviously to grow businesses and increase self-reliance. The world isn’t really geared up to work like this at the moment and the global economic community is obviously pushing back with tariffs of its own to combat what it sees as the beginning of an attempt to dismantle a global system of trade which has dominated for a long time.

Agreements are now being made without the US which will undoubtedly lead to an increased level of isolationism, potentially while other countries reap the benefits of decreased trade frictions. China is at the forefront of many of these with its Belt and Road initiative. The US still has iconic brands which produce major products needed the world over, but this is gradually changing over time on both the machinery and technology fronts. Countries are increasingly reliant on each other in the global economy, hugely facilitated by the advent of the internet which is why things like sanctions are more powerful weapons now than they may have been historically.

On the tariffs front, China has more to lose than the US given the size of the trade imbalance but a trade war doesn’t just include tariffs. Should things get ugly, outright subsidisation of domestic industries, currency devaluations and other actions to target foreign economic aggressors such as bond dumping can all lead to all out economic warfare. The causes of the great depression are still not entirely agreed upon today but one thing which is almost universally understood is that the Smoot – Hawley Tariff Act in the US exacerbated it.

Have things changed? A common phrase in many circles, routinely laughed at by those in the know is the standard “this time is different” argument, disproven time and again. Will this time be different? History shows us that is unlikely but it will be interesting to watch it unfold. Here’s hoping that the crypto-mining craze is over for good and GPU prices return to normal because we may have other causes of inflation to worry about soon enough.

So no, we're not in a trade war yet, but it sure feels like we're inching our way towards one.