Well well well. It seems like things clearly are getting out of control in the iPhone 6 rumor arena. With previous rumors covering almost everything from the screen to the processor to the battery, there really wasn't much left. Heck, even the alleged fingerprint sensor of the device seemed to have leaked out. Weren't we in for a surprise though courtesy of retailer XtremeGuard. XtremeGuard has listed on its site what seem to be four variants of Apple's upcoming flagship. Something which should undoubtedly surprise Cupertino as well. 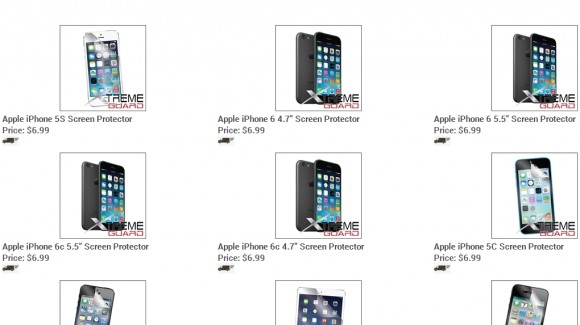 Well ladies and gentlemen, as we know Apple has always portrayed itself as a maker of premium devices. This has, expectedly led to its devices being a tad bit overpriced. The iPhone, since its launch had always been about being the best at what it does. The original iPhone has been said by many to be the primary reason smartphones are popular today. According to some, the iPhone did indeed revolutionize the smartphone industry as it is. Keeping up to that precedence is hard in itself. So every one was a bit surprised when Apple decided to launch a plastic version of the iPhone 5 as well - dubbed as the iPhone 5C. Dubbed as being 'colorful', the 5C was said to be made for those who preferred a variety of options when picking their smartphone.

How does all of this relate to XtremeGuard? Well, according to the retailer, Apple is also launching an iPhone 6C. Now keep in mind that the iPhone 6 is coming in two variations, so that makes a total of four new iPhones being with us this summer. Seems highly unlikely to us. Why? Because, first of all there have been absolutely no rumors about the iPhone 6C. Secondly, the images beside the devices are all the same renders. So XtremeGuard is probably just being overly cautious. An interesting listing though. Perhaps Apple really is looking to cover all market segments this time. Who knows.