Apple's been long rumored to have a smaller iPhone in the works. After the Cupertino company shifted from its long held stance of smaller screened devices last year, a large segment of its users clamored for a smaller device as well, owing to its easier use and accessibility. Since then, we've seen several rumors and speculations that claim Apple might be looking for a smaller iPhone this year, powered by the A8. In fact, a component leak even highlighted the return of plastic on the iPhone. You can take a look at the images here. 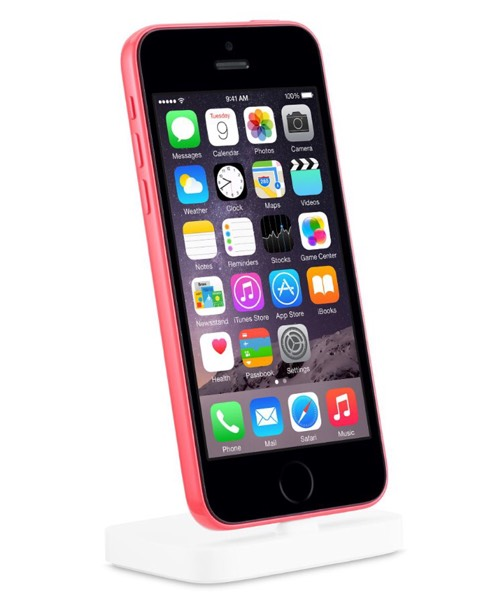 While we've seen several rumors claiming that Apple might be looking to introduce a smaller screened iPhone variant this year, the Cupertino based manufacturer would need to think long and hard before making such a decision. Apple tried to unsuccessfully target the lower-medium end market with the iPhone 5C and the device failed to make as large an impact the company would have hoped. Users simply prefer the premium look and feel of an iPhone it seems, with the iPhone 5C shelved at last year's iPhone 6 launch.

But is the screen size increase on the iPhone making Apple venture out once again into unknown territory? The company's online store might suggest so. Apple's new lightning dock updates on Tuesday show an interesting device listing on its online store. What appears to be an iPhone 5C is among the devices supported by the dock. But here's the catch, this variant of the 5C also sports a Touch ID sensor, which might be an accidental slip up by the company. But even though this image does provide some interesting food for thought, all those wishing for a smaller screened iPhone shouldn't get their hopes up just yet. We've received no credible word on Apple's plans for such a device. So stay tuned, and let us know what you think in the comments section.