From its announcement few weeks ago, iOS 9 has dropped many new features for iPhone and iPad specifically. From the latest to show, iOS 9's low power mode has highlighted quite an impressive details to save power on the device. For some users, battery seemed to have been an issue on iPhone and now the Cupertino giant is bragging about its power saving mode. So what are the mechanics to achieve these mind bobbling results? 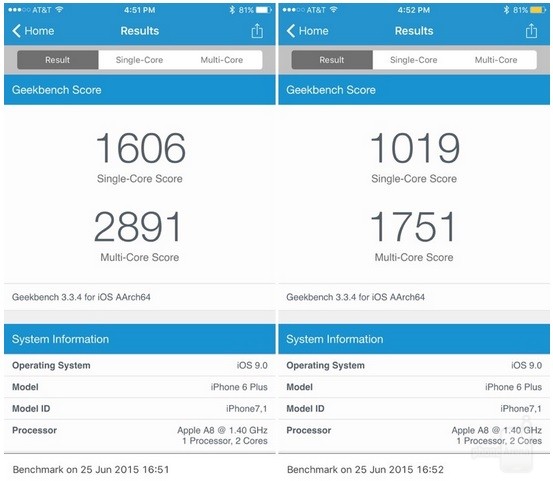 This made us thinking about all the factors that contribute to save power. When the Low Power mode is activated, all additional features that consume battery life are halted. This not only includes the reduction in CPU power consumption but visual effects such as animations, fetching mail, motion effects and refreshing apps on background. This gives iOS 9 the command to lessen battery drainage through Low Power Saving Mode.

Users will be prompted to enable Low Power Mode when battery level reaches 10 or 20 percent. Users can also manually switch it on via a new Battery tab in the settings menu. Considering the Geekbench scores in iPhone 6 Plus, similar results were seen on iPhone 5S, reducing performance by 40 percent. Henceforth, the battery life performance is improved. Additionally, iOS 9 enhances battery life by an hour without the Low Power Mode activation. That's all for now, peeps. Share your thoughts in the comments below.