Keeping the expectations of the users alive for the much awaited iOS 5, Apple  today rolled out iOS 5  Beta 3 for devs . It supports iPad 2, iPad, iPhone 4 (GSM and CDMA), iPhone 3GS and iPod Touch 3rd and 4th Generation.

A third beta version of iTunes 10.5 was also released which seems to be required for syncing your device on iOS 5 beta 3.

According to TechCrunch the new update contains many new features;  the icon for Reminders has been changed, a toggle for GPS has been added along with iTunes free setup and other tweaks. Perhaps the most striking feature discovered is that of Text Tone selection and “Buy More Tones” sitting in this update. Most of the jailbreakers target this tweak allowing users to select custom ringtones but it may no longer be needed, thanks to iOS 5. 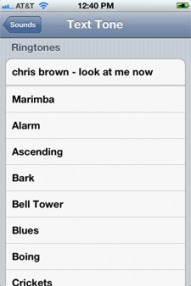