The cat and mouse game between Apple and Jailbreakers continues to take new twists and turns. After the jailbreak tool for iOS 4.3.3 JailbreakMe was released after months in the offing, Apple didn’t turn back and released iOS 4.3.4 for all iOS devices within 10 days in order to patch the exploit in iOS 4.3.3. Jailbreakers stay away!

The release of the new firmware is probably to fix the security hole only and is not expected to bring any new features to the masses. It is however reported that the update contains a patch for iOS's IOMobileFrameBuffer. Apple said the new software addresses an invalid type conversion issue, which could allow malicious code running as the user to gain system privileges. 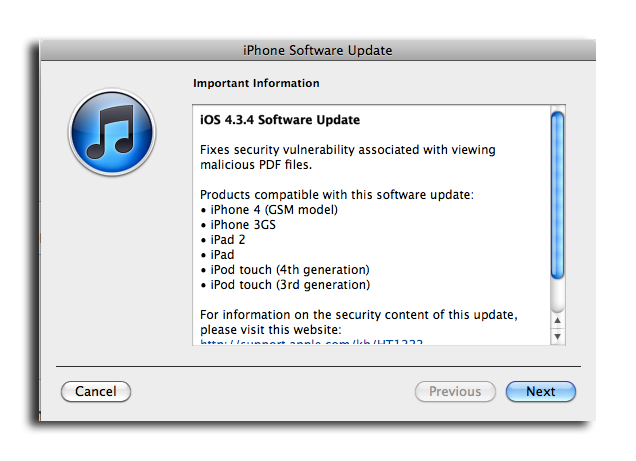 After you’ve downloaded your device’s respective firmware, you can install the software manually by launching iTunes, locating your device on the sidebar and pressing "Restore" while holding the Shift key on Windows and Alt on the Mac.

In iOS 4.3.3 hackers managed to discover the loop hole as a PDF exploit; the users were able to view PDF files directly from Safari. Comex utilized this vulnerability and managed to successfully jailbreak the iOS devices with JailbreakMe.

JailbreakMe 3.0 struck the users with delight as the hassle of connecting to a PC or Mac was finally relinquished as it was a web based jailbreak tool but Apple has once again deprived the jailbreak community from the auspicious luxury.

Jailbreakers are advised not to update to iOS 4.3.4 until another untethered jailbreak tool comes out. Be patient and let hackers do the trick.